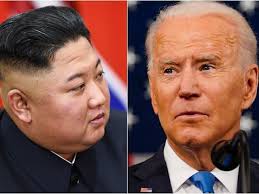 The Biden administration has been more passive toward the North Korean nuclear issue, which is an immediate threat facing South Korea. In May last year, U.S. Secretary of State Antony Blinken announced a policy toward North Korea entitled “A Calibrated, Practical Approach.” The United States intended to resolve the complete denuclearization of the Korean Peninsula through diplomatic engagement, which involves “very close coordination and consultation with allies and partners.”

The first step was to resume dialogue without preconditions with North Korea. However, that was all that happened. In the very next month, Deputy Department Director of the Central Committee of the Workers’ Party of Korea Kim Yo Jong and North Korean Foreign Minister Ri Son Gwon rejected the statement by saying, “We are not thinking about any contact or possibility with the United States.”

Since then, the United States has reportedly made the same proposal to North Korea several times through various channels. However, North Korea responded with provocations of a new long-range cruise missile in September and a submarine-launched ballistic missile in October. The United States strongly condemned this and suggested that it was illegal, but there was no actual action.

The only action the Biden administration took was in December last year, with sanctions regarding human rights violations in North Korea. Although it imposed sanctions on North Korea when it fired a hypersonic missile, this was a symbolic act. Of the six North Koreans subject to sanctions, four were active in Dalian, China, but China did not impose any sanctions. In terms of diplomacy, the U.S. was also at odds with South Korea, which was pushing for an end-of-war declaration. It did not send a specific message about ending the war to North Korea, but rather closed the possibility by imposing human rights sanctions.

One year after Biden’s inauguration, his administration’s North Korea policy has disappeared. The strategic patience attempted during the Obama administration is exactly in line with the situation in which it faced criticism for strategic negligence. The government had to either pressure North Korea as much as possible or seek more active dialogue to halt North Korea’s nuclear development, but it remained on the sidelines. It is not strange that the contribution about how “Biden’s North Korea Policy Failed” was published in Foreign Policy on Jan. 24. Even if North Korea continued to develop intercontinental ballistic missiles and brought about a situation in which the U.S. mainland was threatened, it is questionable whether the U.S. would maintain its passive attitude.

The North Korea policy in South Korea — the party most directly exposed to North Korea’s nuclear threat — has been a key influence. With the Moon administration still emphasizing only dialogue despite North Korea’s hard-line stance on withdrawing South Korea’s hostile policy and double standards, and insisting only on unconditional involvement in North Korea, which refrains from using the expression that North Korea’s nuclear missile launch is a provocation or a violation of Security Council sanctions, it would have been difficult for the U.S. to actively take action.

Now there is no choice but to wait for the March election. If the new South Korean government thoroughly reexamines its North Korea policy and actively pursues the denuclearization of North Korea by removing the vague notion of denuclearization of the Korean Peninsula, the U.S. policy may change. Of course, this will require a give-and-take that meets the interests of the United States.