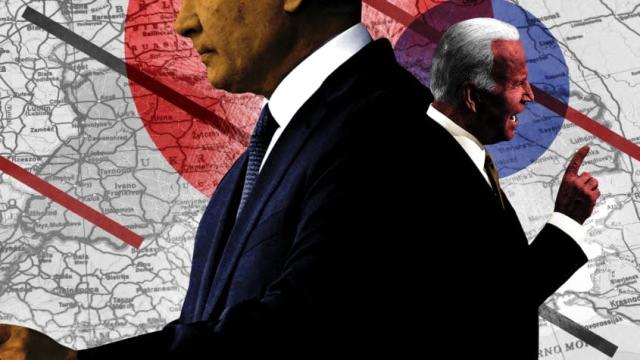 If there is one thing that best encapsulates U.S. policy on Ukraine, it is the way America is faltering in how it manages relations with Iran. Iran is a failed state reeling under a 40-year siege, yet Washington is still blundering about, trying to figure out how to please Iran’s troupe of illusion peddlers and sponsors of terrorism. In such light, one wonders how Washington will be able to subdue the Russian bear, which enjoys far greater dynamism and freedom to make political maneuvers than the West, as well as an ability to take quick initiative.

As to what could become of America in the aftermath of the Ukrainian crisis, many are ruling out the possibility of war and expecting Vladimir Putin to win a battle of wills just like he did previously in the Crimean war. After all, Ukraine is not Cuba, Joe Biden is not John F. Kennedy, and America’s current political and security institutions bear little resemblance to the deep state agencies that were in place during the Cuban missile crisis. How else can one explain the fact that the American giant is up to its ears in pointless negotiations with a regressive and anachronistic Khamenei?

On the one hand, Biden and his administration keep trying to appease Khamenei, who is nothing more than a temple priest, by seeking to bury Khamenei’s mistakes, transfer funds his way and help realize his undeserved nuclear ambitions. On the other hand, Biden wants to defeat Putin, who is a product of one of the world’s most prestigious intelligence agencies and an experienced politician highly skilled in walking political tightropes.

This is what we have to say to Biden: He who handles his enemies with kid gloves, but then uses an iron fist with his allies, will find himself isolated in confronting Russia or even confronting global energy and security crises. The America that the world once knew has changed and declined since it succumbed to the whims and desires of its perverted left, which controls the brothels of Hollywood, New York and Washington. These days, American politicians have no choice but to espouse the left’s agenda and its selective reading of foreign governments, world events and nations. Instead of acting like an adult and upholding the standards that come with being a superpower, America is letting the foibles of its extreme left guide its relations with allies and partners alike.

America’s downward trajectory did not start with Ukraine. After all, it was the United States that handed Iraq over to terrorists and abandoned Libya, Somalia and Afghanistan to chaos. Washington was also the one to suffer the killing of U.S. Marines in Beirut in the early 1980s and the killing of U.S. diplomats in Libya’s Benghazi during the so-called Arab Spring. Eventually, both deadly attacks were registered against an anonymous culprit whom Washington condemns by day, only to secretly meet and negotiate with by night in Europe’s remote hotels.

Undoubtedly, America will remain the largest military power in history, with capabilities 10 times those of any other military. Every other army and power pales in comparison. America, however, is a witless giant, which is why Putin reminded everyone that his last resort would be nuclear weapons, without which he could not hope to counter the Western military machine.

Contrary to how he’s being portrayed by Western media, Putin remains the most sensible politician in this crisis. This is what he’s ostensibly telling his Western counterparts: Power alone can no longer create policy or alter political outcomes, so let us solve the crisis within its current confines by saying no to Ukraine joining NATO. Acting on a solution today would help avert the far more disastrous consequences of a solution in the future that involves nuclear warfare.

What kind of world order lies ahead? Will it be a bipolar Russian-American order, or will China join Russia and America at the helm of a tripolar order? Either outcome is possible, but America’s impotence is now at the intensive care stage; its decision to challenge and make an enemy out of Russia, which remains part of the West, will only make it easier for Beijing to forge a path forward.

It’s as if the crisis raging in eastern Ukraine were one of necessity. America’s waning global leadership has left the world in dire need of some major crisis that can restore global balance by giving rise to new superpowers, alliances, political standards and security boundaries.