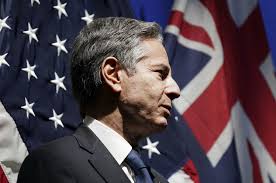 The chief of American diplomacy spent a week in Oceania, while at the same time dealing with the Ukrainian crisis.

U.S. Secretary of State Antony Blinken just spent half the week in Australia, Fiji and Hawaii. In the middle of a crisis with Russia, this journey may seem surprising. In the plane that took him to Melbourne on Tuesday, Blinken explained: “The world is a big place. Our interests are global, and you all know very well the focus that we have put on the Asia-Pacific and Indo-Pacific region.” In Australia, where authorities have just uncovered a new Chinese attempt to interfere in next spring’s general elections, Blinken met for a long time with the foreign ministers of India, Australia and Japan, his partners in the Quadrilateral Security Dialogue.

The purpose is not only to strengthen cooperation with them on global health and environmental issues, but most importantly to show that beyond Moscow, the United States is also keeping a very close eye on Beijing. While Vladimir Putin and Xi Jinping claimed last week to be defending the concept of “indivisible security” in order to fight against all those who would like to attack their areas of influence, the Quad, in the foreign ministers’ final joint statement, intends to “support Indo Pacific countries […] that strive to protect the interests of their people, free from coercion.” In short, to help them, including militarily, to protect themselves from Chinese hegemony.

In Fiji, where the country’s local and submarine paradise is known to be under threat due to global warming, Blinken came to demonstrate that the Quad can help small Pacific islands counter China’s string of pearls strategy, which sometimes forces them to borrow from their huge neighbor, eager for investment and control. All of this is happening in an auction-like atmosphere, with the Marshall Islands loudly asking at the same time how much the United States is willing to pay to maintain or expand its military bases there.

In Honolulu, finally, where the memory of Pearl Harbor remains so vivid, the head of American diplomacy received his Japanese and South Korean partners yesterday. This time, the topic of discussion focused on the nuclear and ballistic threats posed by North Korea, after new and ever more daring tests were made public by the heir of Kim Jong Il. So far from an old Europe on the Atlantic confronted with the demons of revisionism and redivision, Blinken is also preparing to defend the distant horizons of its Pacific coast.