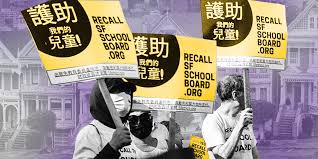 San Francisco’s recent special election results were no surprise: An overwhelming majority of San Franciscans voted to oust three members of the city’s school board.

The recall was successful due to a number of factors including the individual behavior of the board members, racial dynamics, and traditional politics. The recalled members’ conduct was the primary factor in the recall’s success. These arrogant and clueless board members turned a blind eye to the public. Racial dynamics also influenced the recall; the attempt to change the current admissions process at the city’s prestigious Lowell High School blatantly targeted Asian American students, prompting a backlash from San Francisco’s Chinese community, whose members fought back in support of their right to education. And the campaign to oust the school board members took advantage of power politics, as conservative backers seized the opportunity to make generous financial contributions to the recall campaign.

San Francisco has long been a hub of progressive thought, yet San Franciscans recalled three progressive school board members in one fell swoop. And the vote was not even close; three-quarters of those who voted supported the recall. In addition, if the other four board members had been eligible for recall, all seven would have been on the chopping block. The overwhelming support for the recall in a city as liberal as San Francisco points to something more significant: voters believe that progressives have gone too far left, too quickly. If progressives become too radical, voters may respond by moving toward the center or the right, leading to conflict or even a schism within the Democratic Party.

The leader of the recall effort, Siva Raj, said he has always been proud to call himself a progressive. So when he realized what the progressive school board officials had been doing during the pandemic, he was shocked to find out that he was comparatively old-fashioned. Instead of responding to the demands of parents, board members busied themselves with renaming schools and attempting to cancel and replace Lowell’s current admissions process. Raj felt the “progressive” tenets of the school board were at odds with his own values.

What happened in San Francisco is a wake-up call to Democratic strategists, especially in a midterm election year.

From time to time, we hear about the renaming of sports teams, schools, buildings and streets in various places. Renaming schools may undoubtedly be one way to make social progress assuming the process is based on a comprehensive understanding of history, relies on rational discussion and seeks to find common ground among various groups. However, if one group sees renaming as an opportunity to advance its own ideology while it disregards the views of the community, such efforts only sow division and stir up hostility. How can this be considered progress?

Recently, the use of affirmative action in high school and college admissions has once again attracted public attention. The controversy over admissions at Lowell is just part of a national debate over affirmative action, which touches on the nature and function of education, and involves the history and interests of different ethnic groups. Fair discussion and policy adjustments are necessary to make substantive progress on this issue. However, the San Francisco school board unilaterally attempted to abolish Lowell’s current admissions system without adequately notifying the community and the government. The board’s action gave the members of the Asian American community sufficient reason to believe they were being unfairly targeted and that the board was catering to specific ethnic groups at their expense.

The school board’s attempt to rename schools and alter Lowell’s admissions process certainly incurred the public’s wrath. But this anger has been brewing for some time now, and it’s not limited to San Francisco’s high schools.

The death of George Floyd — who died after a white police officer knelt on his neck — ignited a debate over excessive use of force by police. In San Francisco and around the country, people demanded that cities defund their police departments and use the money to pay reparations to African Americans. Americans certainly need to reexamine police use of force as it affects all ethnic groups. However, while crime continues to increase, it may not be appropriate to cut police budgets and lay off police officers. Doing so may lead people to suspect cities are prioritizing certain political agendas over public safety.

Government and society as a whole are indeed responsible for protecting society’s most vulnerable. But San Francisco’s government has been widely denounced for its failure to deal with homelessness in the city and public drug abuse. The city has allocated funds to spread awareness of the issue, but the problem remains. As more and more homeless people and drug addicts pour into the city, many blame progressives for overly tolerant policies and overly lenient law enforcement they believe are causing the influx of problems.

In a public statement following the special election, San Francisco Mayor London Breed acknowledged that the recall results sent a “clear message.” Breed emphasized that San Franciscans have an incredible vision for the city, but they must deal with the issues at hand while they lay the foundation for the future. While her statement is an attempt to appease voters, how can it not also be viewed as a warning to the progressives on city’s board of supervisors? They may have an excellent vision for San Francisco, but the reality is that San Francisco is in dire straits.

In liberal San Francisco, we are seeing the political pendulum swing from far left back toward the center. Is this a sign of things to come in the U.S.? We will have to wait and see.