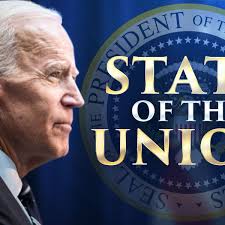 The president of the United States delivers a triumphalist speech about the conflict, but does not specify any alternative plans in case Putin is not intimidated by sanctions.

In the seats and gallery of the Senate chamber, there was an atmosphere akin to Boca Juniors hooligans or the Ramón de Carranza stadium stands, with a profusion of blue and yellow (bosteros — Boca Juniors supporters — would call it blue and gold). Ukraine’s national colors popped up on little flags, neckties, dresses, pins, cockades, pashminas, badges, brooches, pendants or patches pinned to the outfits of both representatives and guests. The only thing keeping the State of the Union address from being a celebration of military triumph was that there was no blue and yellow rain of confetti. But what was raining over Ukrainian cities, as did the previous six nights, was Russian artillery.

Joe Biden, who was all smiles during his first speech of its kind, claimed a victory that was not Ukraine’s.

Biden’s cause for celebration was the coordinated response with his Western allies, the staggering round of sanctions imposed on Russia and the increasing isolation of its leader, Vladimir Putin, due to his unjustified aggression against Ukraine.

“We countered Russia’s lies with truth,” said the president about the numerous warnings issued by his administration regarding an invasion of Ukraine, denied a thousand times by Moscow. “And now that the has acted the free world is holding him accountable,” he added, before listing the economic costs the invasion will have for Putin’s regime.

There Will Be No American Soldiers in Ukraine

“He thought the West and NATO wouldn’t respond. And he thought he could divide us at home,” he said, about the Russian president. “Putin was wrong. We were ready.”

Kyiv wishes for a readiness that goes beyond that, beleaguered as it is by an imposing Russian contingent and with the authorities handing out rifles to the civilian population. Biden got his fill of celebrating the courage of Ukrainians, their heroic struggle, their determination that “inspires the world.” Starting with their president, Volodymyr Zelenskyy.

With narrowed eyes, he encouraged the audience to stand up for an ovation, to send “an unmistakable signal” that the U.S. stands “with the Ukrainian people.” Biden gave a reminder of the military and humanitarian aid granted to Ukraine, in addition to the sanctions aiming to squeeze Putin. But Zelenskyy and the rest of Ukrainians want more: a no-fly zone in their skies (which the White House has refused several times because it would imply shooting down Russian planes), more weapons, promoting their entry in the European Union and NATO and, if possible, intervention on the front line.

In the State of the Union address, Biden once more made it clear that that is not a possibility: there will be no American soldiers in Ukrainian territory. However, he will “defend every inch of territory of NATO countries.”

“We were ready,” said Biden, but he offered no road map in the face of the expected deteriorating situation in Ukraine. Putin will persist in his aim of overthrowing Zelenskyy’s government, installing a puppet leader and removing any Western ambitions from Ukraine. American intelligence expects the siege of Kyiv and a toughening of the bombing raids if Ukrainians, as it appears, continue to resist. It is likely that civilian casualties and war crime allegations will pile up. The president of the United States did not advance his response to that scenario or in the event — already proven in the 2014 annexation of Crimea — that sanctions will not prevent the Russian president’s destructive behavior. Biden did not make any promises he will not be able to keep.