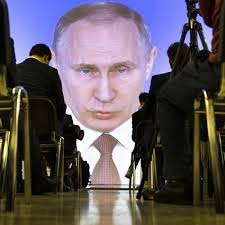 I will begin this column with a long quotation from a recent speech by Vladimir Putin. In my opinion, it draws a complete picture of him. It also depicts several of the characteristics of 21st-century nationalism, which is similar to those that stained the last century with blood, but also differs.

First of all, keep in mind that the “fifth column” is a term first used by the Francoists during the Spanish civil war and refers to the part of the local population who, in a conflict, organizes to maintain positions that favor the enemy.

“The West is betting on a fifth column: on national traitors. On those who earn money here, but live elsewhere. And it is not that those people live elsewhere in the geographical sense, but rather within their own minds, within their servile consciences.

“I am in no way judging those who have a house in Miami or on the French Riviera who cannot live without foie gras, oysters and the aforementioned gender freedoms. That is not the issue, but rather that many of those people, by their nature, are mentally there and not here. They are not with our people, with Russia.

“In their opinion, that position is a sign of belonging to a superior caste, to a superior race. These are people who would sell their mother to be allowed to sit in the aisle of the highest level of society. They want to be like that highest level, to imitate it in every possible way. But they forget or do not understand that if they are needed by this supposed higher level, they are needed only as interchangeable parts to be used to cause maximum harm to our people.

“The West is trying to divide our society, speculating about combat casualties, about the socioeconomic consequences of sanctions, provoking a civil confrontation in Russia and using its fifth column to achieve its purposes. And its has only one purpose — I have already spoken about it — the destruction of Russia.

“But any people, and more so the Russian people, are able to distinguish true patriots from scum and traitors, and to simply spit them out like a bug that accidentally fell into their mouths. Spit them on the ground. I am convinced that this natural and necessary self-purification of society will serve only to strengthen our country, our solidarity, cohesion and our readiness to respond to any challenge.”

From the outset, it is clear that, for the Russian dictator, the enemy is the West, not only in geographic or ideological terms, but also in mental and cultural terms. They are the globalized local citizen.

Then comes a game of similarities: Globalization is not equal to liberal democracy or respect for diversity, but to pâté, oysters and luxury. Thus, in the discourse, a difference is established for the common citizen, who must completely reject the values of the globalized: liberal democracy, together with foie gras.

Immediately afterward, a clarification: It is not a matter of money, because there are rich people committed to the country (in my leadership group), but of deep loyalties and closeness to the people. It is, therefore, a cultural issue. They are far from you, while the leadership group is close.

Then, a combined approach of resentment and values: They aspire to belong to another caste and are capable of selling their own mothers in that endeavor, capable of destroying the real people — their own physical mother and their mother-nation. They want to be different from us. They feel different. They are sellouts, and they do it for crumbs of recognition from abroad. The fifth columnist is described in all his vileness. He must be hated.

What follows is an attack on information (no longer on the media, because those that have not been controlled have been silenced). To talk about combat casualties or the bad economic situation is to provoke civil confrontation (with the government and with those who refuse to listen to anything other than propaganda) and, therefore, to serve the interests of the enemy.

Whoever criticizes the current order is a defeatist. Or worse, a “disfattista,” the term used by Italian fascists to describe anyone who, from their point of view, strove to undo the country by sowing doubts about the achievements of the regime. That is why the lack of confidence on the part of a section of the population is, in Putin’s discourse, nothing less than the destruction of Russia.

Later comes the final blow, vulgar and forceful. The Russian people, who are one and wise, will identify the scum and spit them out like the insects they are. They will get rid of them. The wonderful thing is that this is a process of purification by the people — of themselves. What is cast out is the garbage, excrement and impurity that it held in its own bosom. To eliminate it has a hygienic purpose and engaging in its elimination will strengthen the body politic and will thus win in the challenge of war it now encounters.

We are not facing the classic fascism of the last century, with the implications of hierarchy, corporatism or the role of the Party. But we clearly now confront a new attempt — so far successful — to impose a conservative, authoritarian and one-person regime based on two things: First, a polarization between traditional people, loyal to the leader, and internationalist elites who have no feelings for their homeland. And second, the search for national glory as a unifying element, even if it means personal losses of all kinds: from the dead son in Ukraine to food shortages or loss of savings. Screwed and without freedoms, but part of a great and respected homeland.

In closing, Putin thus drew a self-portrait and the resulting image is quite unpleasant; but we must accept that, unlike others, he was crystal clear.