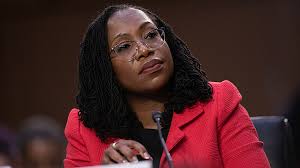 Intimidated by Trump, Republicans lose their way by opposing Jackson’s nomination, a justice who reaffirms democracy.

The early announcement that three moderate Republican senators — Susan Collins of Maine, Lisa Murkowski of Alaska, and Mitt Romney of Utah — would vote to confirm of federal judge Ketanji Brown Jackson’s to the Supreme Court sealed the seating of the first Black woman on the highest court of the country. Last Monday, the Senate Judiciary Committee’s confirmation of President Joe Biden’s nominee highlighted the scope and significance of this historic decision. The confirmation took place 54 years to the day after the assassination of the Rev. Martin Luther King Jr., a martyr for the civil rights movement.

The U.S. Supreme Court will have four women among its nine members for the first time, including Jackson, 51, and Amy Coney Barrett, 50. Considering the longevity of the members who preceded them, they will hold their posts until the second half of the century.

A daughter of educators, Ketanji Onyika Brown Jackson was born in Washington and like most of her future colleagues, is a Harvard graduate. She was confirmed three times by the Senate, first as a federal judge for the District of Washington, and the second as an appellate court judge appointed by Barack Obama. Her third confirmation was as a member of a national commission that evaluated and ended the policy of automatic sentencing in criminal justice cases. A mistake attributed to Democratic President Bill Clinton, this policy doubled the prison population and led to prison privatization, something that became a lucrative business that generated human rights abuses and violations practiced mainly against descendants of slaves and members of other minorities.

Jackson will bring unique experience to the court. She is the first member of the U.S. Supreme Court who has worked as a public defender. She has an uncle who is a police officer in Boston and another uncle who was sentenced to life in prison for drug trafficking, a decision that was later commuted. Jackson defies stereotypes in her personal life. She is married to a white doctor, a former Harvard colleague, with whom she has two daughters. She also includes Paul Ryan among her extended family, a Republican brother-in-law who was House speaker and a vice presidential candidate. Her arrival on the Supreme Court should be — and is for most — a reason for national celebration. However, in the current polarized and poisoned environment of American politics, it is also an indication of the moral bankruptcy of the Republican Party.

Conservatives used the three-day confirmation hearing to try to disqualify Jackson by appealing to the right wing’s favored themes of gender identity and sexual orientation. An ultraconservative senator went so far as to ask the judge to define what a “woman” is. Two senators, both with presidential ambitions, lashed out over several of her decisions involving reduced sentences in pornography-related cases, among the hundreds of sentences she has delivered during her over nine years as a federal judge. Jackson’s responses, backed up by interviews with experts and press articles, showed that her decisions followed the pattern of sentences handed down by all judges, regardless of ethnicity, gender or ideological background. Sens. Ted Cruz of Texas and Josh Hawley of Missouri tried to associate Jackson with critical race theory, which conservatives use to accuse their opponents of promoting division and racism in society. Unruffled, the judge replied that such a theory is an academic matter and does not interfere with her decisions, which are based on the facts, the law and the Constitution.

South Carolina Sen. Lindsey Graham, who voted last year in favor of Jackson’s nomination to the second-highest federal court of appeal in the country, said in the Supreme Court hearing that he considers her “to be a person of exceptionally good character, respected by her peers, and someone who has worked hard to achieve her current position.” Sen. Ben Sasse of Nebraska stated that “Judge Jackson has impeccable credentials and a deep understanding of the law.” However, in a clear illustration of the conservatives’ loss of direction, both voted against confirmation, fearful of irritating former President Donald Trump, who now holds absolute control over the Republican Party.

The Washington Post denounced the hypocrisy of conservatives in its main editorial last Monday. “By heaping praise on Judge Jackson while opposing her nomination, Republicans seek to obscure the unattractive image of their almost entirely White caucus rejecting the first Black woman ever nominated to the high court … Kind words cannot disguise the fact that they are grasping for pretexts, each more preposterous than the last, to oppose this historic nominee. Their actions will speak louder now — and in the history books.”

*Editor’s note: The original language version of this article is available with a paid subscription.