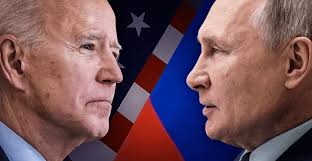 Sixty-six days later, the dispute is no longer over Kyiv, but over the future of Washington and Moscow. Russia’s invasion of Ukraine is about to cross the point of no return in a confrontation between two nations with the capacity to destroy the world.

This is fact: Political survival for both Vladimir Putin and Joe Biden is dependent on the final defeat of the other.

This weekend, Speaker of the House of Representatives Nancy Pelosi, among the most important of Biden’s allies, visited President Volodymyr Zelenskyy in the Ukrainian capital.

There she sent a clear message: “We are on a frontier of freedom and your fight is a fight for everyone. Our commitment is to be there for you until the fight is done.”

Pelosi would have assured Zelenskyy of the provision of weapons necessary to make that victory a reality. She carried the voice of the inhabitant of the White House, who has decided to chain his political future and that of his party to the results of this war.

The situation in Moscow is very similar. Faced with the tortuous advance of the Russian troops, the “special operation” conceived by the Kremlin as a surgical intervention has become a war of overwhelming proportion. Its outcome will determine whether Putin maintains political control of Russia — or not.

Thus, while the Russian president calls for a massive mobilization, and while the United States proceeds to fully support the Ukrainian victory, both are close to crossing the most dangerous of thresholds.

The victory Pelosi is referring to must happen before Nov, 8, or the Democrats will pay dearly in this year’s midterm elections. The same situation is true for Russia: If Putin’s war is not over before the end of 2022, the Russian leader’s mandate will irrevocably expire.

Zoom in up close: From now on, whoever wins the Ukrainian capital will be able to keep his position, whether in Moscow or Washington.

The solemn truth, however, is that only one of the two, either Biden or Putin, will survive the attempt.

About Patricia Simoni 96 Articles
I first edited and translated for Watching America from 2009 through 2011, recently returning and rediscovering the pleasure of working with dedicated translators and editors. Latin America is of special interest to me. In the mid-60’s, I was a Peace Corps volunteer in Chile, and later lived for three years in Mexico, in the states of Oaxaca and Michoacán and in Mexico City. During those years, my work included interviewing in anthropology research, teaching at a bilingual school in the federal district, and conducting workshops in home nursing care for disadvantaged inner city women. I earned a BS degree from Wagner College, masters and doctoral degrees from WVU, and was a faculty member of the WVU School of Nursing for 27 years. In that position, I coordinated a two-year federal grant (FIPSE) at WVU for an exchange of nursing students with the University of Guanajuato, Mexico. Presently a retiree, I live in Morgantown, West Virginia, where I enjoy traditional Appalachian fiddling with friends. Working toward the mission of WA, to help those in the U.S. see ourselves as others see us, gives me a sense of purpose.