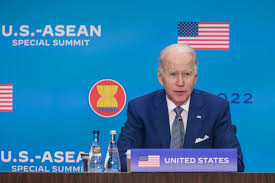 President Joe Biden held a special White House summit on May 12-13 with member heads of state in the Association of Southeast Asian Nations. It was a meeting that had been rescheduled and much delayed, with only eight ASEAN leaders in attendance. Prime Minister Min Aung Hlaing of Myanmar had been barred from the event, and the Philippines, its general election just completed, sent only delegates.

Nonetheless, seeing the United States and ASEAN as entering a new era, Biden pledged to improve the bilateral relationship as a “Comprehensive Strategic Partnership that is meaningful, substantive, and mutually beneficial” this November.

The planning and preparation of this multilateral summit were not simply for the United States to showcase its good relations with ASEAN but served to draw ASEAN into the fold of its anti-China Indo-Pacific Strategy, thereby emphasizing that the United States is capable of organizing anti-Russian efforts in the West while simultaneously opposing China in the Asia-Pacific region. The Indo-Pacific Strategy, announced by the White House in February, stresses that the United States wants to strengthen cooperation with ASEAN and explore opportunities for cooperation between the U.S.-Japan-Australia-India Quadrilateral Security Dialogue and ASEAN. As is commonly known, Quad is directed against China, so to strengthen cooperation between ASEAN and Quad is to shoehorn ASEAN into the wider picture of U.S. Indo-Pacific Strategy. This is an insult to ASEAN, which adheres to the Asia-Pacific concept, but to the United States, it is an anti-Chinese opportunity.

With the outbreak of the crisis in Ukraine, U.S.-led NATO has formed the “hard core” of the Western world’s anti-Russian activity, not only in continuing to lend military aid to Ukraine, but also in imposing wave upon wave of comprehensive sanctions on Russia. While the United States is leading the Western world in all-out efforts against Russia, it is also increasing its deterrence against China. NATO has recently strengthened its ties with Japan, South Korea, Australia and India and is actively promoting its own “Asia-Pacificization.” At the same time that the United States is putting NATO to good use as a hatchet man, it is also warning China that it will pay a heavy price if it helps Russia evade sanctions. As such, through NATO and the Indo-Pacific Strategy, the United States is directing a strategic, two-way squeeze on Russia and China.

As the conflict between Russia and Ukraine reaches gridlock, the United States and the West have started launching swift and fierce attacks against Russia and intensifying their offensives against China. Seen in this context, the recent summit was much more about forcing ASEAN to join the anti-China gang than it was about the United States appeasing ASEAN. As U.S. National Security Council Indo-Pacific Coordinator Kurt Campbell said, “There has been a sense that in previous administrations [Washington] had set off to focus on the Indo-Pacific but found ourselves with other pressing challenges that draw us away. I think there is a deep sense that can’t happen again.”

Will ASEAN Cooperate with US Anti-China Efforts? Wishful Thinking by the US

ASEAN is not a monolith, and there are differences among members about ASEAN’s position on the United States, among them Myanmar, which is under U.S. sanctions; Cambodia, which is a staunch ally of China; Singapore, of course, which is cooperating with U.S. sanctions against Russia; and countries such as Vietnam and the Philippines, which are engaged in territorial disputes with China over island sovereignty, so it is almost impossible for the United States to draw ASEAN fully into the anti-China Indo-Pacific fold. Even Singapore is unwilling to become an anti-China pawn of the United States.

The 10 ASEAN countries would also look favorably on the United States signaling a bilateral “new era.” For one thing, the United States has promised to upgrade the ASEAN-U.S. strategic partnership to one that is “meaningful, substantive, and mutually beneficial” by the end of this year, and furthermore, ASEAN is interested in the Indo-Pacific Economic Framework proposed by the United States last year. However, the “gift list” that the United States offered at the summit was far too miserly to fill ASEAN with any sense of gratification or reciprocity.

At the summit, Biden pledged to invest $150 million in ASEAN countries in areas such as clean energy infrastructure, maritime security, electronics, education exchanges and public health. But this “pledge,” which will be honored who knows when, is not only like throwing good money after bad, it is also a paltry sum compared to China’s offer last year of $1.5 billion in aid to ASEAN over a three-year period.

More importantly, the IPEF only exists on paper for the time being and is focused on making rules rather than opening up markets. Compared to the ASEAN-sponsored Regional Comprehensive Economic Partnership, which includes China and 15 other countries, the IPEF may glitter, but it is not gold.

ASEAN Interests Better Served by Not Taking a Side

More importantly still, the Asia-Pacific region, which was seen as a geopolitical and geo-economic protagonist during the Obama era, has now been replaced with an Indo-Pacific Strategy with the ASEAN-10 countries now playing supporting roles in the eyes of the Biden administration. This has led to a sense of aggrievement among ASEAN nations, which would now be willing to strengthen their strategic ties with China. Even though some of them are involved in South China Sea territorial disputes, they are not willing to get caught up in any disagreements between Chinese and American powers. Therefore, ASEAN has no desire to become a U.S. tool and pawn against China, preferring instead that the United States revive the old Asia-Pacific concept and establish close economic and trade ties with ASEAN countries. In short, the interests of each ASEAN member state would be better served by not choosing sides between China and the United States, and instead by maintaining balanced and stable economic and trade ties with both. That is why ASEAN, the world’s fourth-largest market, is looking to increase its exports to the United States and furthermore, wants the United States to return to the Trans-Pacific Partnership, now known as the Comprehensive and Progressive Agreement for Trans-Pacific Partnership.

It is no longer possible for the United States to return to the TPP for two reasons: first, the trade protectionism and populist sentiment provoked during the Trump era are still considerably popular in the United States, so Biden, constrained by public opinion and partisan interests, cannot return to the multilateralism of the Obama era; and second, based on the strategic considerations of the Biden era, to pursue extreme competition against China more effectively, it is necessary to build a bigger strategic anti-China circle, hence the Indo-Pacific Strategy, which involves India, Japan and Australia. On Biden’s strategic scale, the Indo-Pacific Strategy far outweighs the Asia-Pacific region.

We should not underestimate ASEAN’s wisdom nor overlook the vital relations that are of great concern to the deep-seated interests of both China and ASEAN. It is only by being a force in the heart of the Asia-Pacific and maintaining the balance between China and the United States that ASEAN is most in line with its overall interests.

The author is a visiting fellow at the Chongyang Institute for Financial Studies, Renmin University of China

About Matthew McKay 22 Articles
A British citizen and raised in Switzerland, Matthew received his honours degree in Chinese Studies from the University of Oxford. Following a 15-year stint in the corporate sector, he went on to earn his MA in Chinese Languages, Literature and Civilization at the University of Geneva, and is both a Fellow of the Royal Asiatic Society, and a Career Affiliate of the Chartered Institute of Linguists. Apart from Switzerland, he has lived in the UK, Taiwan and Germany, and his hobbies include literary translation, language teaching, and getting creative in the kitchen.