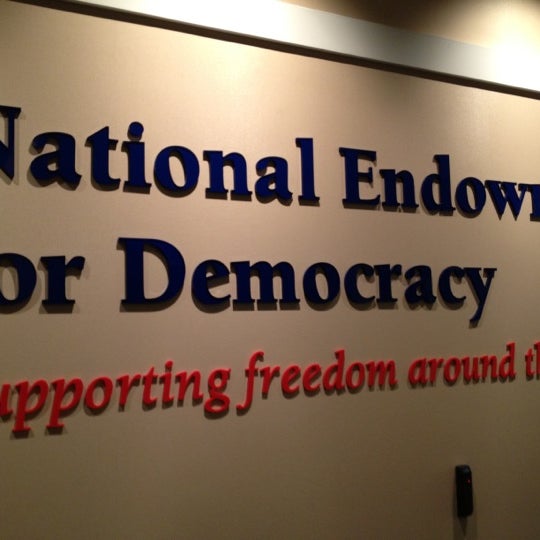 China’s Ministry of Foreign Affairs published a “Fact Sheet on the National Endowment for Democracy” on May 7. This white paper attracted considerable public interest. Instigating color revolutions, colluding with local political groups, funding separatist forces and producing disinformation — the information in the fact sheet has in extensive detail unmasked the National Endowment for Democracy so the world can clearly see the real face of this second CIA. Under the pretense of “promoting democracy,” the NED subverts legitimate governments of other countries and fosters pro-U.S. puppet forces. It is essentially the organization that launders illicit U.S. government covert operations into open operations around the world.

The NED, established in 1983, is nominally a nongovernmental organization that provides support for democracy abroad, but in fact relies on the continuous financial support of the White House and Congress and takes its orders from the U.S. government. The NED has four core institutes, including the National Democratic Institute for International Affairs. These four organizations have clearly defined roles; through these four institutes, the U.S. exports American values around the world to incite “democratic movements” and conduct operations that overthrow, infiltrate and sabotage other governments. NED founder Allen Weinstein didn’t mince his words in a 1991 interview with The Washington Post, when he said, “A lot of what we do today was done covertly 25 years ago by the CIA.” Therefore, these “democracy crusaders“ that are among the main forces of the U.S. government and NED has therefore come to be known globally as the “second CIA.”

The NED instigates color revolutions meant to overthrow other governments. According to the information disclosed in the fact sheet, the NED was exposed as being behind such color revolutions instigated and orchestrated by the U.S., including the disintegration of the Soviet Union, the Rose Revolution in Georgia, the Orange Revolution in Ukraine and the Arab Spring. Take the Orange Revolution in Ukraine as an example. it was through the NED that the United States delivered $65 million to Ukrainian opposition parties. When massive anti-government demonstrations broke out in Ukraine in 2013, the NED funded as many as 65 nongovernmental organizations and even provided generous funding to pay each and every protester. Russia’s state-owned domestic news agency, RIA Novosti, reported that, in 2014, the NED spent $14 million on a project in Ukraine that led to massive demonstrations that overthrew the government of Viktor Yanukovych. Former CIA case officer Philip Agee said in an interview, “Instead of having just the CIA going behind the scenes and trying to manipulate the process by inserting money here and instructions there and so forth … They have, now, a sidekick — which is this National Endowment for Democracy. NED.”

Meddling in the political agenda of other countries, the NED frequently colludes with local political groups. The fact sheet points out that the NED has infiltrated target countries for a long time, cultivating local anti-government forces and continuously stoking social tension. The NED extends its puppet-master hands into the internal affairs of other countries. The NED has repeatedly interfered in China’s internal affairs by meddling in the Hong Kong elections.

Besides targeting China, the NED has also repeatedly interfered in Russia’s elections and threatens Russia’s constitution, defense, and national security. Max Blumenthal, founder of The Grayzone website, which has investigated and reported on the NED for a long time, said in an interview that “those operating the National Endowment for Democracy have a neoconservative agenda. They want the U.S. to be the world’s sole dominant power, unchallenged by any other regimes. In particular, it targets socialist governments and those nations unafraid and independent of the U.S., those deemed competitors, like China and Russia.”

The NED also funds activities and academic programs for the purpose of ideological infiltration. The NED operates furtively as a large financier of dissidents across every global region. Since 1991, the NED has annually granted its Democracy Award to political activists and dissidents for being “defenders of basic human rights and democratic values.” These activists come from Russia, China, North Korea, Myanmar, Iran, Cuba, Venezuela and Ukraine, among other countries. The Democracy Award encourages the exportation of democracy.

In another example of how the NED operates, the organization provided grants to the Egyptian Democratic Academy, a nongovernmental organization, for ideological infiltration in Egypt. In June 2011, the new U.S. ambassador to Egypt, Anne Patterson, acknowledged that her country had spent no less than $40 million to “promote democracy” in Egypt since February of that year. Given the examples enumerated above, it’s not difficult to see that, despite the NED’s pretext of promoting scholarship and democracy, it is instead engaged in extremely disgraceful activities such as the penetration and hijacking of value systems all over the world.

For a long time, the United States has imposed its own political system and values on others, implementing “democratization initiatives,” arbitrarily imposing unilateral sanctions and instigating color revolutions, all of which have resulted in calamity. The U.S. has long used democracy as a weapon of mass destruction to barge into other countries. By exporting democracy, the U.S. has time and again accrued a series of blood debts. As the pawn of American government, the NED will be nailed to history’s pillar of shame.