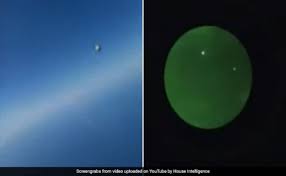 What was discussed during the U.S. House Intelligence Committee’s first hearing on UFOs in more than 50 years? Alien life has visited Earth? A national security threat? And why are China and Russia being implicated? What is the purpose behind suddenly convening the UFO hearing? CCTV Military Disclosure will analyze it for you! What known alien information was disclosed during the live broadcast of the public hearing?

On May 17, the U.S. House Intelligence Committee held a public hearing on unidentified flying objects. In this first congressional public hearing on UFOs in more than 50 years, Deputy Director of Naval Intelligence Scott Bray showcased pictures and videos of unidentified aerial phenomena observed by the U.S. military. The hearing lasted 90 minutes and was broadcast live. What conclusions about UFOs were reached at this high-profile hearing?

At the hearing, when members of Congress asked Under Secretary of Defense for Intelligence and Security Ronald Moultrie about the existence of extraterrestrial life, he would not confirm: “There are elements in our government that are engaged in looking for life in other places. …They’ve been searching for extraterrestrial life. … our goal is not to potentially cover up something, if we were to find something. It’s to understand what may be out there.”

Many UFO sightings around the world are misunderstandings of natural phenomena such as lentil-shaped “flying saucer” clouds, “ball lightning” and meteorites.

At the hearing, Bray said that some of the lights from unmanned aerial systems are reflected through night vision goggles onto the single-lens reflex cameras as triangles. As for whether the effect could be experimentally reproduced, he did not explain further.

He used the topic as a pretext to further the U.S. agenda and fabricated an issue out of nothing.

Compared to aliens, the U.S. is much more concerned with China and Russia.

The videos aired at the hearing showed unidentified aerial phenomena aloft flying upwind, either remaining stationary or moving at considerable speed without discernible means of propulsion. Bray and Moultrie did not explain the phenomena.

Although the hearing offered little in the way of explaining UAP, the members of Congress were oddly serious about the speculative “security threat.”

A CNN report claimed that the U.S. lawmakers, intelligence officers and military personnel working on unidentified aerial phenomena were far more concerned “not that alien life is visiting Earth, but rather that a foreign adversary like Russia or China might be fielding some kind of next-generation technology in American airspace that the United States doesn’t know about.”

Military expert Du Wenlong analyzed this pinning of UFO activity on China and Russia as an obvious exaggeration of the air threat presented by China and Russia: “The United States has its own aims: first, to build support for the development of new types of weapons and equipment, and to strive for a competitive advantage in unmanned systems technology; second, the United States needs to fund these projects, and through this sensationalizing, Congress can justify allocating a large budget; furthermore, the United States is also deflecting from its own testing of new weapons and equipment.”

An ulterior motive lurks. UFOs are being used to peddle the space warfare agenda.

In the Russia-Ukraine conflict, the U.S. is using space satellites to provide coordinate guidance for Ukrainian military drones. The U.S. space exploration company Starlink dispatched its satellite internet terminals to Ukraine, and Starlink broadband service is active in the Ukraine region. According to British media reports, the Starlink system helped the Ukrainian command and control apparatus gain communication capabilities, and supported Ukrainian drone strikes on the Russian army. On May 19, Russian media reported that, according to a captured Ukrainian military officer, the Ukrainian army had used the Starlink equipment in the Azovstal steel plant to communicate with the Ukrainian General Staff.

When in trouble, shift the focus to UFOs.

The U.S. public began paying attention to UFOs in 1947. That year, a pilot reported seeing nine saucer-like objects flying at supersonic speeds over Mount Rainier in Washington state. This was the first recorded witness account of UFOs. That was also the year the Cold War between the U.S. and USSR officially began.

In 1966, when the Cold War was at its peak, the United States held a UFO hearing; however, after the dissolution of the USSR, reporting on UFOs dropped off.

In April 2020, then-U.S. President Donald Trump was caught in an uproar following his suggestion of injecting disinfectant as a treatment for COVID-19. A month later, the U.S. Naval Safety Center released eight hazard reports on encounters between U.S. naval aircraft and UFOs.

A U.S. historian of science, Kate Dorsch, pointed out in an article in Foreign Policy magazine that in 2021 UFO concerns were essentially the product of Cold War fears between the U.S. and USSR. U.S. narratives about UFOs, both in 2021 and 1947, coincidentally concern “national security.”

Du stated that the situation in Europe is now undergoing a major change. The United States plays a central role in the conflict between Russia and Ukraine and the large amount of military assistance provided to Ukraine has greatly harmed the U.S. economy and citizenry. At this time, the U.S. is holding UFO hearings to divert attention and to give the brains of its people a break.