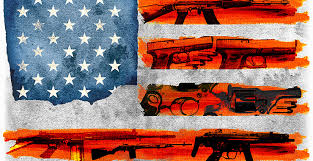 Gun fanatics, of whom there are many, plus firearms manufacturers, have defeated attempts to establish strict regulation on the use of firearms.

Girls full of life with their broad smiles and tanned skin, dressed in the uniform of their Uvalde, Texas elementary school basketball team, are dead because of a shooting that could have been avoided.

Every deep-seated hatred in the United States, whether based on ethnicity, religion, sexual preference, ideology or whatever else you care to add, is expressed with bullets because the laws make it easy for it to happen.

And gun fanatics, of whom there are many, plus firearms manufacturers, have defeated attempts to pass any serious regulation.

Even Donald Trump was moved to meet with family members of the 17 children and teachers of a high school in Parkland, Florida, who were killed by a deranged shooter in 2018.

Trump returned to Washington and met in the White House with Democratic and Republican legislators the very next day.

He asked his party colleagues not to remain “petrified” in the face of pressure from the National Rifle Association and to work together with the Democrats to pass comprehensive legislation banning assault weapons.

Trump was sensible and rational for one moment: “It’s time. We’ve got to stop this nonsense,” he told lawmakers.

Subsequently, the urgency to legislate dissipated and the issue disappeared from the president’s agenda.

During a country music festival in Las Vegas in October 2017, a few months before the massacre of children in Florida, a man fired at a crowd from his 32nd floor hotel window near the front of the venue, killing more than 50 people. He used a “buttstock”; a device that attaches to a semi-automatic rifle and allows more shots to be fired more quickly.

The government banned buttstocks, and Trump went a step further. He sought to ban braces that fix the aim of the shooter so they can hit their target.

But his Republican colleagues, NRA leaders and members of his White House team persuaded him to withdraw the proposals.

Here is the disillusioning conclusion: If a Republican president like Trump, popular among gun lovers, could not pass gun control measures, a Democratic and unpopular president such as Joe Biden will not be able to either.

Since the massacre at an elementary school in Sandy Hook, Connecticut that left 20 children and six adults dead, there have been more than 3,500 mass shootings in the country.

No one escapes. Before Tuesday’s massacre in Texas, The New York Times provided a concise review of major shootings. They include incidents at:

• A Black church in Charleston, South Carolina in 2015;

• A government-funded nonprofit center in San Bernardino, California in 2015;

• A synagogue in Pittsburgh, Pennsylvania in 2018;

• A Walmart in El Paso, Texas, victims were mostly Latino;

• Hours later, a shooting in a popular nightlife area in Dayton, Ohio, in 2019;

• Asian American massage establishments in Atlanta, Georgia in 2021; and

• Just a week ago, a racist attack at a supermarket in a Black neighborhood in Buffalo, New York, which left 10 people dead.

And now, children and teachers in Uvalde, Texas.

These incidents do not, and will not, stop as a result of legislation because there is something about the gun manufacturers and the NRA that chastens presidents and legislators. Gen. Alvaro Obregon would have said what they have said, and he would surely have been right: They are not just firing blanks.

The only way forward is through the courts.

Meanwhile, as novelist John Updike said in June 1968 when Robert Kennedy was assassinated in a hotel room in Los Angeles after winning the California Democratic presidential primary and two months after Martin Luther King Jr. was killed in Memphis, “God seems to have removed his blessing from the United States.”