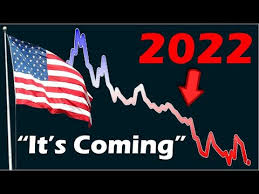 The highest inflation in four decades and surging fuel prices are current economic realities in the U.S. The world power is unable to sit out the crisis overseas and avoid the negative consequences of the anti-Russian sanctions imposed by the collective West. As of today, there are no obvious signs that the White House is going to change its policy regarding the Ukrainian conflict. However, everything can change. Several U.S. media giants have recently started exploring the possibility of a “big deal” with Russia. The reason is quite simple: The impending crisis might be even more devastating than the notorious recession of 1973 to 1975.

Much has already been said about the economic problems of Europe. The Ukrainian conflict and subsequent anti-Russian sanctions have had a staggeringly negative impact on key European Union economic actors. Energy prices are rising. Regular and stable supply chains have been disrupted. EU producers are worried about the future of their businesses since it is quite impossible to conclude any long-term contracts with suppliers now. In the meantime, a serious food crisis is approaching. People in developing countries are facing starvation, whereas Europeans might only experience a surge in food prices. What is happening in the U.S.?

Americans Are Crying Too

The U.S. economy is undoubtedly under pressure right now. However, Russia must admit that its arch rival is a tough nut to crack. After all, the U.S. is the world’s largest oil and natural gas producer. It is a fact that the U.S. produces more oil than Russia and Saudi Arabia and more natural gas than either Russia or Qatar. The volume of fossil fuel consumption in the U.S. exceeds the volume of consumption in Russia, which can be attributed to the size of the U.S. economy and population. Besides, the overseas superpower isn’t experiencing any serious food shortages. The U.S. ranks fourth in the world’s top wheat producers. In case of any trouble, Canada, which has been a U.S. ally for a long time and shares the longest international land border with the U.S., is ready to come to the rescue because it ranks fifth on the list of top wheat producers.

That said, even the world power is not immune to global economic problems. By analyzing America’s media headlines, it can easily be noticed how alarmist they have become. For example, CNN, one of the major U.S. networks that is closely affiliated with the ruling Democratic Party, says the following on its website:

“The economy is going into the toilet. Let’s hope no one flushes it!”

It is not just empty words. The facts cannot be denied: The annual inflation rate in America reached 8.3%, the highest in 40 years. According to the U.N., the average global rate is around 6.7%. At the same time, the annual inflation rate in Russia is expected to reach 17.8%. It is worth noting that the gap between Russia and the developed Western countries has always been enormous, but now, on the contrary, it is not as large. U.S. fuel prices are increasing at an incredibly high rate. A gallon of fuel has soared to $4.81. It has more than doubled since Jan. 2021, when Republican leader Donald Trump was about to resign.

It is hard not to notice that the current economic turmoil in the U.S. is directly related to its problematic bilateral relations with Moscow. One doesn’t have to be a political analyst to notice that.

“Russia is turning off the gas in some European countries while Europe looks to move beyond Russian oil. That has created some energy shortages, sending prices through the roof. The Fed can’t do anything about that unless it’s sitting on an oil well (it isn’t). Russia’s continued invasion of Ukraine has sent commodity prices soaring, creating a global food crisis,” CNN reported.

How is the White House going to solve these problems? It seems that it doesn’t plan on doing anything about them. The U.S. is prepared to face any difficulties for the sake of its struggle for world leadership. In order to preserve the unipolar world, Washington is willing to sacrifice not only Ukraine but also some of its oldest allies from the Cold War era. The U.S. is currently allocating enormous funds to support the Ukrainian army and forcing its NATO partners to do the same, thus making it virtually impossible to end the bloodshed in Ukraine.

However, it cannot be unequivocally stated that Joe Biden’s administration will strictly adhere to an exclusively militaristic approach. After all, the structure of American society is somewhat different from that of Russia, China or Iran. The Americans are not ready to be enlisted to defend their national interests, especially in the case of a distant former Soviet Union country. Financial losses keep hurting the U.S. economy. American media giants are increasingly supporting the idea of peace talks with Russia. The Washington Post admits that the U.S. has considerable disagreements with major European Union powers — Germany, France and Italy. These countries do not consider it necessary to completely isolate Russia from Europe. They realize that it is impossible. As a matter of fact, even after the Bolsheviks came to power, Europe couldn’t isolate Russia because of the activities of the Communist International (typically abbreviated as Comintern) and Russia’s revolutionary propaganda.

The New York Times is even more radical, arguing that it is necessary to stop thoughtlessly flooding Ukraine with American weapons and finally start looking for a peaceful solution. More recently, the same Washington Post has actually suggested the idea of the Korean scenario in Ukraine, arguing that it is quite possible that Moscow will control half of Ukraine, forcing Western powers to recognize these territories as a part of Russia. The same thing happened in 1953, when Westerners made peace with the loss of the northern part of the Korean Peninsula. It now depends on the Russian military what piece of historically Russian territories the U.S. is willing to surrender.

About Aleksandr Gopp 37 Articles
He is an EFL teacher and a freelance translator. He holds an MA in 19th Century Russian History. He loves traveling, languages, ancient history, and mobile photography. Currently based in Hanoi, Vietnam.