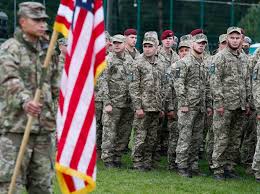 Despite statements and warnings by the Pentagon, American special operations forces are still in Ukraine training the Armed Forces of Ukraine “in the fight against Russia.” Former special operations veterans with years of experience have eased into a private military operations group, “PMC Mozart.” The veterans chose the name to spite the Russian PMC “Wagner Group.”

Could Ukraine become a second Vietnam for America? This question was raised by New York Times journalist Dave Philipps. In his opinion, the U.S. is concerned that sending troops to Ukraine, where “democracy came under attack” and “the United States saw a threat to an ally,” could provoke a nuclear war. Instead, it has decided to supply its “ally” with weapons.

More or less the same thing happened in Vietnam: In the first stage, America provided aid to pro-Western South Vietnam, pumping it full of weapons as military advisers trained the regime’s army. It ended in a full-scale war in which the Americans suffered a catastrophic defeat.

The main difference, Philipps pointed out, is that official Pentagon personnel were working in Vietnam. While contract servicemen and women have not jetted to “Independent” Ukraine, veterans in the guise of volunteers and mercenaries have.

Once there, many of them not only train Ukrainian combatants but also take part in combat operations. For their part, the volunteers reject the idea that they could ignite a greater war:

“We are executing U.S. foreign policy in a way the military can’t,” said Andrew Milburn, a retired United States Marine Corps Special Operations colonel who commands the group of volunteer veterans who provide training and consulting for the Armed Forces of Ukraine. In the colonel’s words, the veterans are supporting U.S. objectives while simultaneously precluding U.S. interference in the war.

“I’m plausible deniability,” he said. “We can do the work, and the U.S. can say they have nothing to do with us, and that is absolutely true.”

So, what is the story behind this “Mozart Group,” and whose music do they play?

They Fight for Donations? That’s Ridiculous!

According to Andrey Popov, a member of the Association of Veterans of the anti-terror group “Alpha,” it is difficult to imagine how the creation of private military companies — “Mozart,” “Beethoven” or otherwise — might influence the conflict. Who even knows about their presence, except for dilettantes reading newspapers, watching Telegram channels and listening to the “voice” of the Office of the President of Ukraine, Oleksiy Arestovych.

According to Popov, “The first goal of these publications is to show an allegedly positive dynamic in Kyiv’s developing situation. So they say the Americans have made another PMC for us. Now they’ll show everyone, tasks will get completed and we’ll defeat everyone.

“Keep in mind that this private military company claims it isn’t financed by anyone. But ‘private,’ first and foremost, means making a profit. Usually these companies are founded by former soldiers or people with proximity to generals. And their goal is to receive and complete military objectives. From the beginning, PMCs were exclusively created with the goal of generating profit.

“Why is it more convenient to use PMCs? First of all, because wounded and even dead personnel from these companies are not indicated in a single official report. Also, they aren’t owed any kind of payment after the conclusion of their operations and they have no social guarantees or welfare provisions. They aren’t recognized as veterans, they receive no pensions, their treatment isn’t paid for and so on,” the expert explained. This is convenient for clients, especially since PMCs can be used in any questionable operation, and later it is always possible to disavow them. They have no relationship with us, the government will say.

“It’s amusing to say that no one finances them, and they conduct their activities based on ‘donations’,” Popov explained. “You have to remember that now PMCs work to guard the rear. When forces conduct strikes from multiple rocket launchers, they advance; then frontline units — special operations forces, armored vehicles. And as they maneuver through the territory, they require logistics support, ammunition resupply and provisions. Someone must also guard the stockpiles. That’s what the PMCs do. This is doctrine for the USA and many other countries.

“But given how the Ukrainian army is retreating, I don’t see any work for PMCs here, if they aren’t executing any military objectives of strategic or even operational value.

“Honestly, to use PMCs, Ukraine needs to at least advance and gain a foothold in new territory, and then the presence of private contractors makes sense. But the situation today suggests PMCs aren’t necessary to Ukraine and are unlikely to be needed in the future. At least, not as our special military operation is being conducted,” Popov concluded.

“We have known of the presence of foreign mercenaries and representatives of Western PMCs in Ukraine for quite a long time,” Director of the Bureau of Military-Political Analysis Aleksandr Mikhailov said in a comment to Tsargrad.

“We know they are selected first and foremost by representatives from Western intelligence services. Through a network of private military companies that are essentially one big U.S. spy network beyond its borders, mercenaries are recruited to participate in military activities in Ukraine,” the expert said. In his words, there are people from over 50 countries in an enormous contingent, the International Legion, which is dominated by Polish, American, Canadian, British, German and French citizens.

But there are also the Balkan states, people from Middle Eastern countries, people from African states, and even Australians and people from South America. All this functions under Washington’s explicit curatorship and that of its on-site emissaries.

“So when the Americans comment about the creation of various PMC branches, this is basically to shrug off legal responsibility for those crimes that were committed under U.S. patronage for eight years in Ukraine,” Mikhailov asserted. “After all, foreign specialists started arriving in Ukraine back in 2014, from the beginning of the military conflict in the Donbas.

“At first these were one-time arrivals, but gradually the situation expanded to become an organizational rotation. Instructors arrived to train Ukrainian combatants to use Western weapons, basically conducting training events to bring the Ukrainian Army up to NATO standards.

“And naturally, beginning with spring — the summer of last year, when an increase in the concentration of Western specialists began, we were already openly saying that representatives of foreign military-commercial structures were not only present in Ukraine but were also fighting there. That is, mercenaries, since they are not pursuing any nationally oriented goals set by their own governments. Thus even calling them private military companies is difficult.

“In my view,” the expert continued, “the Americans already understand the campaign in Ukraine will be lost. They see that in five months, Russia’s special operation has not lost its momentum, that the Luhansk People’s Republic is already completely controlled by the Russian side and that allied forces are taking territory under control every day.

“In Washington a sense of awareness is growing that soon they will have to answer for their deeds before international law. Therefore legal ‘patches’ are beginning to appear. What these will do tomorrow might be termed creating legitimacy for those people fighting in Ukraine, officially distancing them from the U.S.”