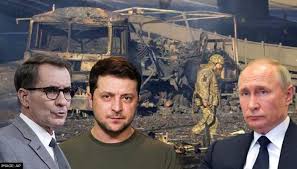 The U.S. has finally discovered what has been known for several weeks: the territories, liberated from the Kyiv regime, will hold a referendum on joining Russia. Washington calls it an “annexation playbook” and compares it to the events in Crimea in 2014. As strange as it sounds, in this case, the White House’s statements can only help Russia.

John Kirby, Coordinator for Strategic Communications at the National Security Council in the White House, talked about Moscow’s sinister new plans for Ukraine. “We are seeing ample evidence in intelligence and in the public domain that Russia intends to try to annex additional Ukrainian territory. Russia is beginning to roll out a version of what you could call an annexation playbook, very similar to the one we saw in 2014 [during the return of Crimea to Russia — Vzglyad]. Already, Russia is installing illegitimate proxy officials in the areas of Ukraine that are under its control. And we know their next moves.”

Kirby was mocked in Russia after these remarks, because after all, Russia’s next moves are not a secret to anyone.

Several weeks ago, it became known that referendums on joining Russia will take place in the liberated territory of the Donetsk People’s Republic and the Luhansk People’s Republic. The result is quite predictable. The only question is, under which conditions will these republics join Russia — that is, will they keep their status as republics or become Russian provinces.

Moreover, Russian authorities recently confirmed what experts had claimed earlier — that other liberated territories in Ukraine will also exercise their right to self-determination. Kirby stated that he is talking about “Kherson and Zaporizhzhia.” However, Russia has now liberated other territories, too, specifically nearly a third of the Kharkiv region and a small fragment of the Mykolaiv region.

This was the state of affairs as of mid-July, while the referendums themselves are supposed to be held in the fall, when the total area of the liberated territories is expected to be even larger. “The geography of the operation has changed. It’s far from being just the DPR and the LPR now, it’s also the Kherson and Zaporizhzhia regions and a range of other territories. The process of liberation is still underway, steadily and persistently,” Russian Foreign Minister Sergey Lavrov said.

Kyiv, of course, is fuming. “By confessing his dreams to grab more Ukrainian land, the Russian foreign minister proves that Russia rejects diplomacy and focuses on war and terror. Russians want blood, not talks. I call on all partners to step up sanctions pressure on Russia and speed up arms deliveries to Ukraine,” Ukrainian Foreign Affairs Minister Dmytro Kuleba responded.

Kuleba is the head of the Ukrainian government body that in March (from the moment the Istanbul peace talks ended) first rejected a compromise reached with Turkish mediation, and then shut down the entire negotiating process with Moscow. After this, naturally, the geography of the Russian special military operation began to change (in the way Lavrov has clarified), including all territories of the former Ukraine liberated by Russia.

The U.S., in turn, doesn’t recognize this new geography, just as it plans to refuse to recognize all future referendums, saying that the referendums violate the U.N. Charter. Of course, Washington ignores the fact that the citizens of Kherson, Zaporizhzhia and other territories will decide for themselves.

The Americans claim that the choice won’t be free, that Russia has established a rule of terror and now literally forces the locals to get Russian citizenship. (Apparently, these long lines outside passport offices are forming at gunpoint.) Hence, America assures us their response to these referendums will be “quick and firm” and that Moscow will become an “even bigger outcast” than it is now.

This raises two questions. How should Moscow react to these threats, and how should we hold the referendums?

Maria Zakharova, spokeswoman for the Russian Ministry of Foreign Affairs, has already answered the first question. “The White House’s mistake is that, even without former Ukrainian territories joining Russia, the U.S. introduced before and continues to introduce new sanctions. So their new threat has fallen on deaf ears. To the contrary, it strengthened our resolve to staying the course,” she wrote on Telegram.

Russia’s logic is very simple in this case. Yes, sanctions harm the Russian economy. Yet, the main rule of the sanctions policy — “if you do that, you get sanctioned, if you don’t — you won’t” — doesn’t work anymore. At least not with Russia.

The West has used its recent sanctions policy to convince Moscow that these sanctions would be imposed on Russia no matter what. So what’s the point in canceling the referendum in Zaporizhzhia, let’s say, just to prevent sanctions? The same sanctions will be imposed later regardless, when the Democratic Party loses the midterm elections and blames a “Russian conspiracy” for the loss.

The same Russian conspiracy that, if we are to believe former Bulgarian Prime Minister Kiril Petkov and current Italian Minister of Foreign Affairs Luigi Di Maio, led to a government shutdown in these two countries. “We are astonished at the power of Russian diplomacy, as it’s portrayed in the statements of the Italian media. Apparently, our ambassadors can topple governments with just a couple of phone calls,” Zakharova noted sarcastically.

In short, the referendums will most likely take place. Surely, we can expect that almost no one in the world will recognize their results. Not only the West, but even Russian allies in the Collective Security Treaty Organization and the Eurasian Economic Union (who still haven’t recognized Crimea as a part of Russia — except for Belarus, partially).

But that is not a reason to hold a merely formal referendum. It is highly probable that Russia will make this referendum as open as possible, inviting foreign observers from all available international organizations, not just the Organization for Security and Co-operation in Europe (which is likely to reject the invitation), but also Middle Eastern or East Asian organizations. Any foreign actor will be able to make sure that the referendum will be as transparent and fair as possible.

Of course, in the short term, we won’t benefit from any international presence on this referendum (apart, perhaps, from the fact that it will attract greater media attention). The Russian status of former Ukrainian territories will only be officially recognized by a couple of countries. But in the long term, when the U.S. and the collective West recognize the new Russian borders in Eastern Europe (unable to isolate Russia from themselves anymore), this international presence will become a foundation for legal recognition.

But the remarks by the White House could now be important for the psychological and political state of the territories liberated by Russia. People there sometimes still doubt that Russia has come to stay. Kyiv, after all, promises to “free” them almost daily (by conducting terrorist acts against the people they want to “free”). But now the main geopolitical opponent of Russia — the U.S. itself — has confirmed Moscow’s firm resolve to give these territories free choice. Such acknowledgment is more than enough.

About Artem Belov 39 Articles
Artem Belov is a TESOL-certified English teacher and a freelance translator (Russian>English and English>Russian), currently residing in Russia. He is working on a number of projects, including game localization. You can reach him at belov.g.artem@gmail.com