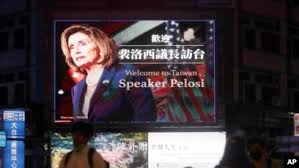 In addition to Russia’s invasion of Ukraine, an increase in military tensions between the U.S. and China regarding Taiwan would be another step in destabilizing the international situation. U.S. and Chinese leaders must work hard to avoid conflict.

U.S. President Joe Biden and Chinese President Xi Jinping held a phone conference and engaged in a vehement exchange about the Taiwan problem.

Another trigger is that U.S. Speaker of the House Nancy Pelosi is scheduled to visit Taiwan in August.

The U.S. speaker of the House is second in line to become president if the current U.S. president dies, next in line to the vice president. So, it is a high-ranking position. The speaker usually travels by military aircraft on foreign trips.

China threatened that if the U.S. proceeds with the visit, the Chinese military “will never sit by idly. China will take strong and resolute measures to safeguard its sovereignty and territorial integrity.”

Xi reportedly told Biden that China strongly opposes “interference by external forces” and warned that “Those who play with fire will perish by it.” Is this not a suggestion of countermeasures if Pelosi visits, and a demand to cancel the plan?

Biden emphasized that the U.S. maintains a “One-China” policy, and on top of that, stated that “the United States strongly opposes unilateral efforts to change the status quo or undermine peace and stability across the Taiwan Strait.”

China itself has invited a strengthened U.S. stance toward Taiwan. The Xi administration does not deny the possibility of military consolidation with Taiwan, and Chinese military aircraft repeatedly breach Taiwan’s air defense identification zone.

It is natural for the U.S. to be on edge about the possibility of China attempting to “unilaterally change the status quo by force” in Taiwan, similar to Russia’s invasion of Ukraine. Isn’t China the one escalating the crisis by “playing with fire?” China must practice self-restraint from incendiary words and actions.

We also want the U.S. to be prudent about actions that could escalate the situation. It is important to demonstrate the intention to support Taiwan without taking military risks. It would be unwise to provide China with anti-U.S.rationale.

The COVID-19 crisis has also had an effect. The U.S. and Chinese leadership have not met face-to-face since Biden assumed the presidency in January 2021.

The U.S. has midterm elections in November, and China is preparing for Communist Party elections in the fall, so at this time domestic politics are a priority. There is concern that the U.S. and China will continue without a mutual understanding, mutual distrust will grow, and the two sides will misread each other’s actions.

On the economic front, the U.S. and China bear heavy responsibility, as the first and second most powerful nations. The leaders from both sides must have a face-to-face meeting as soon as possible, and build a relationship based on at least a minimum level of trust.