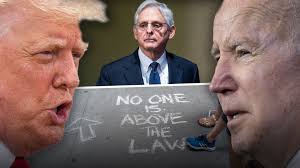 The courts will deliver justice, but the U.S. faces serious risk of some kind of civil war because the former president’s supporters don’t believe anything that is said about their “god.”

The world is living in strange times, with a world war on the horizon and the revelation that the world’s foremost nation was governed by a madman, who although he may have improved the economy, committed the greatest malfeasances while he served as leader of the United States. The FBI’s search for documents “stolen” from the White House where they should have remained is just one among many frightening news stories. Donald Trump still faces accusations in a number of legal matters, from election interference and moral culpability for the invasion of the Capital, to committing fraud and sexual abuse. The courts will deliver justice, but the U.S. faces serious risk of some kind of civil war because the former president’s supporters don’t believe anything that is said about their “god.”

If we think about what happened during the Jan. 6, 2021 assault on the Capitol, we can believe that Trump’s supporters are capable of anything. In a profoundly divided society with many distinct realities – New York is not quite the same as Austin, for example – one hopes that good sense would prevail and that justice would do its job swiftly and fairly. Any investigator mistake could be the fuse that lights a powder keg.

But once again, this story lays bare the difference between the United States and authoritarian regimes, where everything happens and nothing is known. In the last few days I have watched documentaries about Vladimir Putin, and it is striking how the Russian leader manages to commit truly evil actions with the greatest of ease. He orders the assassination of opponents and journalists who bother him, fuels an armed militia like the Wagner Group, and goes about conquering parts of the world he desires. After Georgia, there was Crimea. Now it’s what you see in the rest of Ukraine. It was Syria and Libya in addition to other strategic points in Africa. Putin and other dictators manage to remain in office because there is no democratic system of justice. Now, despite malfeasance, justice works, and no one is above the law.