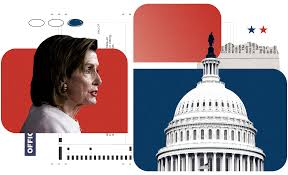 There are close midterm races between President Joe Biden’s majority Democratic Party and the minority Republican Party in the Senate and the House in an election that took place amid record inflation and a slump in the president’s approval rating.

The final count in the Senate will not be known until a runoff election in Georgia, while the Republicans hold the lead in the House.

A Republican majority in either the House or the Senate would create a divide between the administration and Congress, making it more difficult to pass legislation. Inevitably, the Biden administration will be forced to play an inward-looking political game, management of which will become more difficult.

Some Republicans are reluctant to continue massive U.S. aid to Ukraine. As the Russian invasion becomes more protracted, people are suffering from “aid fatigue,” and it is uncertain whether the U.S. can sustain its existing level of support.

Prior to the election, the Republican Party was riding a tailwind as it attacked the Biden administration’s fiscal spending as a cause of record-breaking inflation. Midterm elections have historically been a time when the majority party most often goes down to defeat amid voter criticism.

Thus, the Democratic Party can be said to have done well this time, and there may be various reasons for this.

The Democrats focused on issues including protection of a woman’s right to abortion, which the Supreme Court overturned in June, and gun control. Exit polls also suggest these matters were of particular interest to the economy.

Above all, the Democratic Party has made the state of democracy a key issue given the influence of former Republican President Trump, who baselessly claimed massive fraud in the last presidential election. More than half of the 569 Republicans running did not recognize the 2020 election results and questioned whether Biden won.

Election workers also faced a series of threats. A man believed to be a Trump supporter broke into the house of Democratic House Speaker Nancy Pelosi, attacking and seriously wounding her husband. Moderate Republicans may have felt threatened as well.

President Biden said of the Democrats’ good fight, that the voters “sent a clear and unmistakable message that they want to preserve our democracy.”

However, Republican members of Congress who support Trump are likely to claim that the votes were manipulated, as they did in the 2020 presidential election. Trump is also widely expected to announce shortly that he will run for president in 2024.

The two parties smeared each other during the midterms, and voters rejected the party they do not support. The division within the U.S., where even debate is difficult, is likely to deepen, and the national reconciliation that President Biden sought in his presidential campaign two years ago remains a distant prospect.