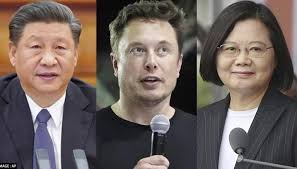 Elon Musk, the world’s richest man, often astonishes people with his behavior. For instance, after he bought Twitter, he laid off large numbers of workers. And, when no one paid the bill for Starlink, the satellite internet service provided to Ukraine, he decided to shut it off.

The Financial Times reported that Musk believes the conflict in the Taiwan Strait is intensifying and that as soon as a war breaks out, not only will Tesla suffer severe losses, but Apple will also be in trouble. Billionaire Musk believes that a war in the Taiwan Strait would cause a 30% loss in the global economy. Therefore, he recommends that Taiwan become one of China’s special administrative regions to avoid economic disaster.

This American billionaire actually went so far as to suggest “one county, two systems.” The most important company Musk commands is Tesla, which this September manufactured a record-breaking 83,135 vehicles in China — an 8% increase over August. It is estimated that this year, 1.2 million Tesla electric vehicles will be produced in China, and Tesla’s future prospects look even brighter. If a war breaks out in the Taiwan Strait, Tesla’s losses would be incalculable.

“One country, two systems” and “special administrative region” have long been politically incorrect terms here that politicians avoid like the plague. One legislator proposed that if Musk does not change his statement, Tesla would be boycotted indefinitely. But how many vehicles can Tesla really sell in Taiwan?

Some people believe that Musk’s words do not represent the position of the U.S. government and so should be taken with a grain of salt. However, what is the actual stance of the U.S. government on the situation in the Taiwan Strait? The Biden administration has affirmed that if China takes military action, the U.S. will support Taiwan. Subsequently, the State Department hastily declared that its commitment to the One-China policy has not changed. Some American commentators have pointed out that the policy of strategic ambiguity promoted by Henry Kissinger decades ago has gradually become one of clarity. Whom should we trust?

I think the words of former British Prime Minister Henry John Temple, 3rd Viscount Palmerston, most accurately reveal the true face of a powerful country: The British Empire has no eternal enemies or allies, only eternal interests.

What are the eternal interests of a republic like the U.S.? Simple: to maintain its position as a global hegemon. A hegemon’s navy has the most might, and it can beat anyone it likes. If the little guys are smart, they’ll obey the hegemon! Furthermore, Uncle Sam’s financial resources must be robust. American financial groups have made a lot of money all over the world for many years. To continue reaping the rewards without putting in much effort, the U.S. must continue to protect the earnings of these financial groups. The main role of the U.S. government is to serve these groups and the wealthy and harmonize conflicts of interests between financial groups, while appeasing the middle class and taking care of those in poverty to a small degree. If many financial groups agree with Musk’s idea of a special administrative region, it would become the official policy of the U.S. government.

Another school of thought in American think tanks is that waging war on other people’s territory is a good way to make money. To restrain China’s rise, a war should be ignited in the Taiwan Strait. The U.S. can watch from afar as the two sides viciously battle it out. When Taiwan is eventually destroyed and China’s rise is stopped, can Uncle Sam continue to dominate from afar for another century? This method is the most advantageous for U.S. interests. Just look at the Russia-Ukraine war: Uncle Sam has given $66 billion in military aid to Ukraine (and will slowly collect the debt later) and ordered the freeze of more than $600 billion in overseas Russian assets, making a lot of money. German Chancellor Olaf Scholz said, “[A]ny change in Taiwan’s status quo must be peaceful or by mutual agreement.” The only thing the current global hegemon fears is peace, because chaos equals money.

For those living under the roof of Uncle Sam, two paths are drawn: a special administrative region or war in the Taiwan Strait. What path should the obedient little guys take? Many of my friends advise me, “Must you think so much? Have a cup of Ethiopian Yirgacheffe coffee, and let us enjoy the small pleasures in life.”

Escaping reality has long been the custom here.

The author is a film director.