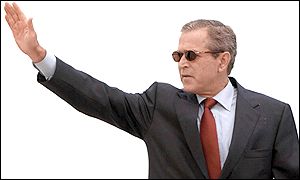 Wave Goodbye to the Bush Era

Not only has the incompetence of the Bush Administration becoming painfully obvious to the American people, according to this op-ed article from Egypt’s Al-Ahram, ‘It seems that American sanity itself is beginning to totally break down -- melt down, or disappear.’

It could be a coincidence that during a week that world leaders gathered in New York to attend the United Nations' annual General Assembly meeting, the American people displayed a degree of fed-up-ness with the Bush Administration they have never shown before. The number of negative articles and commentaries has been too numerous to list. I choose only two or three examples to convey the prevailing mood.

On Tuesday, September 13, during the 14th Annual Policy-makers Conference of the National Council on U.S.-Arab Relations, Chas Freeman, former ambassador to Saudi Arabia stated: "Once seen as the reliable champion of a generous and just international order based on the rule of law, the United States is now widely viewed as an inveterately selfish spoiler of international organizations and a scofflaw in international affairs. Once seen as the last best hope for mankind, the United States is now -- according to many polls -- more feared than admired in a lengthening list of countries."

The following day, one of the most astute political commentators for The Washington Post, E.J. Dionne, wrote a scathing editorial entitled "End of Bush Era." He starts by saying that the sooner politicians in both parties realize that the Bush Era is over, the better for them and the country. Both Dionne and Freeman agree that Bush put patriotism to the service of narrowly ideological partisanship. The colossal fiasco in was followed by the catastrophic failure regarding Hurricane Katrina. The utter failure of the relief efforts has "penetrated the country's consciousness." Americans Victimize Bush With a Fad He Himself Began in Mesopotamia.

Aspects of failure on almost every front become more obvious every day. In Dionne's words, "the glorious economy Bush kept touting turned out not so glorious for many Americans. The Census Bureau's annual economic report released in the midst of the Katrina disaster found that 4.1 million Americans had slipped into poverty between 2001 and 2004."

According to Paul Craig Roberts of Counterpunch magazine: "The destruction of New Orleans is the responsibility of the most incompetent government in American history and perhaps in all history. Bush has squandered the lives and health of thousands of people. He has run through hundreds of billions of borrowed dollars. He has lost 's reputation and its allies. With barbaric torture and destruction of our civil liberty, he has stripped of its inherent goodness and morality. And now Bush has lost 's largest port and 25 percent of its oil supply. All because he started a gratuitous war egged on by a clique of crazy neo-conservatives who have sacrificed American interests to their insane agendas. The thing is, so far, no one has been held accountable."

The General Assembly's annual meetings happened also to coincide with the fourth anniversary of the 9/11 terrorist attacks in New York City and Washington. On this occasion, a growing number of policy experts are openly arguing that Bush's strategy for conducting the war on terror -- particularly his preferences for military action over soft power, and for working with a compliant "coalition of the willing" over independent allies and multilateral mechanisms -- is in urgent need for reevaluation and redirection.

It is growing more and more obvious, according to these experts, that "enlightened diplomacy must be combined with a robust commitment to compete vigorously for hearts and minds." This group sports half a dozen former secretaries of state and national security advisers, including Madeleine Albright, former NATO commander General Wesley Clark and Senator Charles Hagel, among other heavyweights. They published a statement implicitly criticizing Bush's conduct of the war noting that "terrorism is a tactic, not an enemy," and stressing that success in the war will require "a strong partnership with allies based on mutual respect" living up to traditional U.S. principles such as respecting law in the conduct of war. 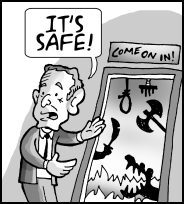 A similar statement was issued by Nir Rosen of the New American Foundation in which he said, "they don't hate us for who we are, but for what we do ... An American withdrawal from Iraq and Israeli withdrawal from the occupied territories to 1967 lines would do more to fight terrorism than any military action ever could."

Bush's problems, or more accurately, problems caused by President Bush, fall in two categories: external and domestic. Those who are able to be candid and call a spade a spade, continue to remind audiences, like Ambassador Freeman, that "the extremism and terrorism bred by the continuing injustices and crimes against humanity in the Holy Land continue to take their toll in places as remote from the Holy Land as Britain, Thailand, Nigeria, Indonesia, India, Pakistan, and Afghanistan."

But it also has its consequences on the American home front. Freeman says that the political system is premised on the notion of competition between two parties -- an adversary process in which one party criticizes and proposes alternatives to the politics of the other. "This system has clearly broken down," he believes. "Patriotism is confused with silent political acquiescence, as a gullible public accepts subject requiring active debate without a word of protest. Those who know better say nothing, even when they can see the country being led into disaster. The opposition party not only doesn’t oppose, it doesn’t propose alternatives either, because it has no ideas or because it lacks confidence in those it has been too timid to advance. This is not just a political problem; it is a systemic breakdown in the American democracy."

However, democracy is not the only thing that seems to be breaking down. It seems that American sanity itself is beginning to totally break down -- melt down, or disappear. In a significant shift after half a century of nuclear deterrence based on the threat of massive retaliation, the Pentagon has revised its doctrine to allow pre-emptive strikes against states or terror groups, to destroy enemies and biological weapons stockpiles. We have not seen an outpouring of outrage since the Washington Post published the news last week, perhaps because no one yet believes this could actually be the policy of the United States Government.

Dionne says of Bush: "He invoked our national anger over terrorism to win support for a war in . But he failed to pay heed to those who warned that the would need many more troops and careful planning to see the job through. The president assumed things would turn out fine, on the basis of wildly optimistic assumptions. Careful policy-making and thinking through potential flaws in your approach are not his administration's strong suits."

Even before Katrina, Bush would have been a "lame duck president," but with Katrina, his administration's ineptitude makes his whole era look pathetic. Richard Cohen says in the Washington Post, "if Bush were the CEO of a major corporation, his board of directors would have fired him. It would want to know what the hell he's been doing for the past four years and what he's done with the untold billions given to the Department of Homeland Security. After seeing how the Feds stood by while sick people died in New Orleans hospitals, the board might want to fire itself -- but that is not practical. The board, in this case, is the American people."

Cohen says he feels sorry for Bush; "The man must be perplexed about why he is being held responsible for a natural disaster and not for the one wholly of his making. The war in , after all, is entirely his doing -- from its inception to execution, which have both been inexcusable examples of incompetence."

The saddest thing about the Bush era is that not a single member of his entire negligent team of incompetent architects of the war in has been held accountable. If anything, they have been rewarded with cushier jobs.