Let's Call It 'the War On Non-CIA Endorsed Terror'

Seeking to explain to the people of the West why the War on Terror as it is presently waged is doomed, this op-ed from Pakistan's The Nation newspaper warns Washington to stop the double standards and carelessness it uses in labeling people terrorist, and shows how we got to where we are in the first place.

Pakistan continues to receive black marks for not having brought to book each and every madrassah doing double duty as a camp for jihadist indoctrination and mujahideen training. Does anyone need to be reminded that such camps and zealots were formerly sponsored and blessed by the Western powers now seeking their eradication? 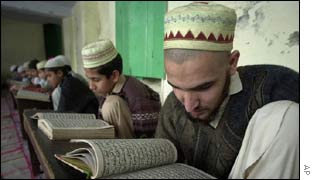 The problem is that jihad is no longer waged against an occupied by Soviets. The xenophobic mujahid, undaunted by death, is now the suicide-bomber of American and European cities; insurgency in U.S.-invaded ; and subversion in pro-American .

, just as it was in the 1980s, is solidly in the American camp. But this time its President has to disarm rather than encourage the religious dynamic. Yesterday's likable mujahid [holy warrior] is now on the other side of the American-invoked war against "terror." Jihad [Holy War], the militant political tool zealously honed by the West in this region less than a generation ago, now requires reform to avert embarrassment over clashing civilizations or Muslim surrender. But the question is, will merely redefining of the word "terrorist" work beyond the confines of government offices? 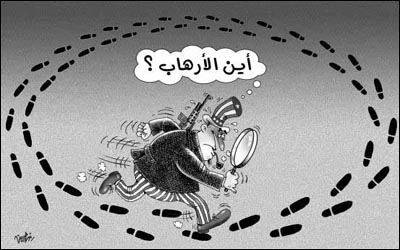 The word terrorist is used in many ways for many purposes, but in virtually all contexts of the global war on terror, Muslims are held responsible. On articles of faith, non-Muslims will obviously not feel and think as Muslims do. But does that mean that every devout Muslim is considered potentially fanatical? Can any intrinsic difference between fanatics and terrorists be conceded? Does or any avowedly Muslim state have to adopt - more than coexist with - all Western norms to be trusted in the new world order?

This asks Muslims to culturally relinquish something Western civilization is exempted from. As the latter is also the civilization defining what is acceptable, this makes what should be joint process coercive rather than equitable. And in this coercion lies the roots of both resistance and rage.

In any case, is an unhappy polity. It has had its own political experiences with extremism and terror, juxtaposing anglicized democracy and political Islam; native identity and a lifestyle espoused by imperial masters-gone-by. It is essential to understand these entangling strands, and in the context of a successful war on terror, it is indispensable for the secular West too understand the conflicts and contradictions it imposes and embodies. Because for Pakistanis or Muslims alone to be revising their position is simply not enough.

If nothing else, the adage that armies of occupation and repression give rise to terrorist resistance has yet to be overturned. The tactics of the war against terror promote that very same terror. That is the "collateral damage" that the West cannot dismiss. It is true enough that the present wave of terrorism emanates from Muslims and is linked with religious fanaticism. But there are other motivations at work in the Muslim terrorist.

The fuel for al-Qaeda was Osama bin Laden's resentment at the extension of facilities to American forces in his country [] after the first Gulf War. He became a magnet for Muslims impassioned with similar perception of foreign political and cultural domination. In , the feeling that the general's regime [Musharraf], like the monarch's [Saudi Prince Abdullah], is prone to American prioritizing, ominously replicates the circumstances that created bin Laden, who the CIA came to know as a terrorist.

To avoid historical confusion, it is just as well to say "jihadist" for non-CIA endorsed jihad. But semantics apart, averting mutations of bin Laden involves much more than closing religious schools and do-it-yourself classes on mass destruction. Osama has found covert support and has taken informal refuge/sanctuary with empathizing Muslims in a number of countries. The carried out its own kind of retaliation, and flew its national flag; the new kind of terrorist does not.

Diversity of nationality and unity of religion distinguish today's global terrorist. His cause and mindset are qualitatively different from others that use the tactics of urban guerrilla war, for example the Kurdish, Palestinian and Kashmiri. These can be dubbed nationalists and freedom-fighters - or terrorists - depending on your political orientation. But the media has been careless about delinking Muslim Palestinians and Muslim Kashmiris (there seems to be a moratorium on Kurds) from the Islamists engaged in global terror, and this offends Muslim sentiment and engenders grievances.

Muslims wonder why Kashmiris and Palestinians are criminalized: The religious rubric does not extend to our Zionist and Hindu adversaries; nor is the gross misapplication of institutional armed might equated with state terrorism. A chafing sense of injustice and righteous indignation at the double standard may predispose Muslims to turning "Islamist"- even without the mentoring of madrassahs.

The archetypal global terrorist hails from various States with a Muslim majority within which they wish to be left to themselves, outside the cultural arc of the global village and the political arrogance and pressure of the newly-sole superpower. They empathize with delinquent elements in a Muslim Diaspora that has experienced cultural mockery and racial punishment (typified by phenomena like Paki-bashing [Pakistan-bashing]) well before al-Qaeda launched its heinous trade.

Those with universal human values shudder at the connotations of the phrase "clash of civilizations"; but an advancing technology-based civilization now brings people into such virtual and actual proximity that they are mentally unprepared to deal with it.

If we confuse our natural reactions with xenophobia, fanaticism, racism, and expansionism, we create the conditions for that which we fear. Cultural assertion and bigotry must not be equated with a predisposition to terror. Nor should administrative measures taken by governments that find their societies threatened be taken as incipient fascism.

Above all, fighting terrorism should not be a pretext to advance a country's political agenda. The cultivation of fear for the purposes of exploiting a fixated and phobic mindset is a dangerous game. The way that power politics and religion are being intertwined in the ongoing war on terror makes a myth of secularism on both sides.

Of course democratic values are to be cherished. But only an unrepentant propagandist believes it was necessary to invade to safeguard Western democracy.


VIDEO FROM THE MUSLIM WORLD: ARABIC TV SPECIAL ON CULT OF SUICIDE BOMBERS

Al-Arabiya TV (Dubai): Excerpts from a Show about Hamas, Islamic Jihad, and the Culture of Martyrdom, Which Aired on July 22, 00:07:22, MEMRI

"Suicide is the killing of oneself for personal reasons. ... The martyrdom operation means that a person dies for a greater cause."