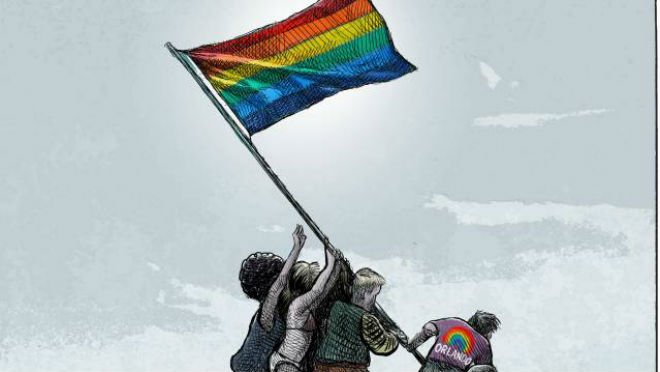 When I came out as gay in the middle of the '90s, there were still curtains drawn across the window in Gothenburg’s biggest gay club. I am sure this could be seen as a sign of isolation, but during a troubled time it was really proof of the opposite. Inside the club everyone could feel safe. Nobody would run the risk of being exposed against their will because an acquaintance happened to pass by, or needing to look over their shoulder on the way home because one of the skinheads of the '90s recognized you from the club window.

Since then a lot has happened. LGBT people have come out of the closet, both in Sweden and globally. On Sunday, the gigantic festival Westpride reached its finale in Gothenburg, a city that less than a decade ago was one of the most homophobic in Sweden, with frequent hate crimes. At the same time as the Gothenburg event, Kiev was hosting a peaceful gay demonstration on streets where the LGBT community are like “red rags to a bull” for both religious and politically-conservative factions.

In the middle of this feeling of political success, the LGBT community are subjected to nothing less than a massacre at the club Pulse in the American city of Orlando. As this is being written it is still unclear what influential powers are behind the attack and what has really happened. The first reports suggest that the gunman is a young radical Muslim who used an automatic weapon to gun down visitors at the club.

Even though a lot is still unclear, the number of dead are painting a clear picture as the number was just increased from 20 to 50. This in turn makes it the worst mass shooting in U.S. history.

Just like other terror attacks against vulnerable groups – for example the Jewish communities in Copenhagen and Paris – the attack was both expected and unexpected. Expected in the sense that the LBGT community’s political success has long been the very symbol of what, in the eyes of political extremists, is seen as the religious and moral decay of liberal democracies. Islamic extremists, right-wing radicals and Christian fundamentalists all regularly and systematically include homophobic messages in their hate propaganda. These messages of hate often reach violent testosterone-fueled young men, making the LBGT community extremely vulnerable.

It is also not the first time this has led to serious consequences. At the end of the '90’s it was the gay pub Admiral Duncan in London that was hit when a young Nazi detonated a nail bomb as guests were enjoying their Friday night. The result was the loss of three human lives, as well as 70 injured. Those of us who believed it would be the last time LBGT people were subjected to blind hate on this scale or larger were probably in the minority.

So why does the attack in Orlando feel so unexpected? Has the LBGT community’s success given us a false sense of security, a feeling that the struggle is almost over, and that we would finally be safe? Because if New York is the cultural LBGT capital of the Western world, Florida is the party capital. This is where masses of gay and lesbian people go every year to party until the early morning. Here, there is no need to be afraid.

After a number of important cases in the Supreme Court during the first decade of the new century, the U.S. is also these days one of the countries who can call itself gay friendly, a country where you no longer need to worry about discriminatory marriage legislation, or being made to feel invisible. Such things are assumed to be part of the past.

Is this not how you are supposed to celebrate such victories? As a citizen in a club among friends and likeminded people, where you can dance away the Saturday night without the need for curtains covering the windows or worrying about what might be waiting for you outside?

On Twitter, leading LBGT activists are now pleading with gays, lesbians and transgender people to not let themselves be scared off, and that life must continue as usual. That is easier said than done when the terrifying pictures from Pulse are transmitted out via media.

At the same time, they are right: That is the only way forward. The time of curtains and fear are in the past; every LBGT person must remember that. Those killed in Orlando should be honored and grieved for. However, not with fear, but by continuing the fight for sexual and gender equality – with more supporters and sympathizers than ever before. No weapon in the world can stop that.