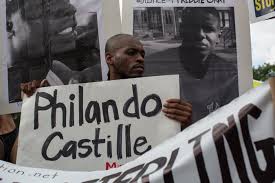 Policemen are killed in Dallas; before that, black people once again die in police violence. The society is ignoring its racism problem. Now radicalization threatens.

Violence in the U.S. is escalating. It is possible that the anger, frustration and grief about a growing number of new cases of racist police violence in Dallas erupted in the targeted attack on police officers. It is not yet clear what motivated the perpetrators to arm themselves with precision weapons as in wartime and to kill. The act will not help the country solve a longstanding problem that has been ignored for far too long: The U.S. is a racist society.

Racism is institutionalized and does not only manifest itself in the dramatic cases in which unarmed African-Americans are shot to death by police. Everyday life is characterized by segregation: Minorities have lousy chances of getting an education, they are paid less, they are more frequently unemployed and they are sentenced to prison terms that are often disproportionate in comparison to whites.

It has been just over a year since President Barack Obama stood on a bridge in Selma where black civil rights activists were bludgeoned on Bloody Sunday 50 years earlier. Obama warned that still not enough was being done, but also praised his country, on paper united by civil rights laws, for its progress. Yet the effort continues.

Take Laquan McDonald, 17 years old, for example. A policeman in Chicago shot him 16 times in 13 seconds. A video of the case led to an investigation of police work in that city of millions. It proves that the police have no respect for the lives of African-Americans. Between 2008 and 2015, more than 400 people were killed by police; some 74 percent of them were African-Americans. They represent, however, only one-third of the population of Chicago.

And now Philando Castile in Minnesota and Alton Sterling in Louisiana. All these cases show that nothing has changed. All of the appeals by politicians and activists fall on deaf ears in a society that constantly praises itself for being a melting pot, a melting pot of many nations. Whites, however, still perceive themselves as first among equals and are only too ready to deny the truth of racism. After all, in the U.S., one is responsible for one’s own fortune, at least as far as the myth goes.

The fact that Castile’s girlfriend filmed his death with her cell phone, and that videos like that of Laquan McDonald’s death are published, only increases the reaction to such acts. The country is forced to watch its racism live; suppressing it becomes more difficult.

The organizational structure of police departments must be reformed. In Ferguson, where a policeman shot the unarmed Michael Brown to death, the population is black; the police are white. Esprit de corps reigns among the troops. Police have always been heroes, unassailable, and no doubt the system protects itself. Again and again, officers who should face manslaughter charges are exonerated.

What is more, politicians and citizens must ask themselves whether they want to live in a society in which weapons are as common as coffee to go. Why do policemen always have to figure that their opponent will draw a weapon? Why did the shooters in Dallas have large weapons with big magazines, and why does that surprise no one? This is another problem that is simply ignored regardless how many victims there might still be.

Society must finally face the violence that, possibly like that in Dallas, provokes counter-violence. Five policemen died there, deliberately shot to death. It would be a catastrophe if the years of doing nothing about the issue of racism now causes people to respond with gun violence, which in the worst case scenario, will end in murderous battles.

Again and again, there have been moments during which the peaceful Black Lives Matter movement has threatened to descend into violence. Any appeal that asks people to deliberately take up arms and radicalize could contradict an appeal by civil rights activists for conciliation and would allow actions to follow words which have achieved nothing. It would prove fatal, and even more people would have to die.

Neither police reform nor gun law reform will immediately end racism and violence. There are no simple answers for it, but yet an unmistakable one: Donald Trump, who again and again provokes violence with racist sentiments and cannot, under any circumstances, become president. It would be an unbearable step backwards, because even the election of a first black president failed to bring any fundamental change. Obama’s life story remains an exception in the United States still. “Our march is not yet finished,” he said a year ago in Selma. As long as African-Americans continue to be shot during traffic stops or in front of supermarkets, the march has just begun.