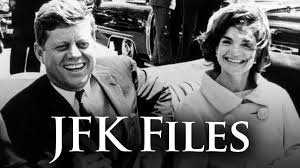 For conspiracy theorists, there is a lot to theorize about again, starting on Thursday. That’s when the National Archives in Washington is releasing the last documents on the murder of President John F. Kennedy in 1963. There will be tens of thousands of new dots to connect, which will draw a new image of the biggest, as yet not fully solved plots of all time.

And thus, enthusiasts will discover new clues that Lee Harvey Oswald did not do it alone, as the president’s Warren Commission concluded a year after the murder. That Cuba was behind it, or the Soviet Union, or the Mafia, or the CIA, or the FBI or Lyndon B. Johnson.

The release of documents is a consequence of a 1992 law, which provided that everything needed to be released no later than a quarter-century from the time the law was passed, absent objections from the sitting president. Trump said this weekend he does not object to the release. At the insistence of presidential adviser Roger Stone, who is in contact with conspiracy theorist Alex Jones, everything will in principle be released, unless there is a convincing security reason not to do so.

And thus, the release of tens of thousands of pages is underway, pages that can be sifted through endlessly. The total collection of documents on the JFK murder comes to 5 million pages, a huge living room full of paper, some 88 percent of which has already been released. Still, about 11 percent of those documents have portions that are blacked out, and 1 percent of those pages have never before been released.

Why have they been kept a secret? The intelligence agencies apparently saw a reason for it. Also now, writes The Washington Post, they have tried to keep some documents in the vault. According to Stone, CIA Director Mike Pompeo frantically tried to convince Trump to withhold release, but to no avail. Trump believes it is time for total transparency in this case, according to the White House.

Of course, it is possible that the documents will prove that Oswald was a CIA agent, as Stone has claimed. Or that Sen. Ted Cruz’s father was involved, as Trump claimed during the election campaign. Whoever looks at the documents – and a few thousand documents were released in July – can see anything they want in them.

It is more likely that the intelligence agencies want to prevent a leak about methods and tactics, even if such methods and tactics are more than half a century old. Also, it is possible that the intelligence agencies are ashamed for having missed warning signs: Oswald, a former Marine, was furious because his honorable discharge had been converted to a dishonorable discharge a few years after he left the service.

According to JFK historian Robert Dallek, the new documents will change nothing about the conclusion that Oswald acted alone, as he told NPR on Wednesday. “But what’s so difficult for so many people to believe is that someone as inconsequential as Oswald could’ve killed someone as consequential as Kennedy,” Dallek said.