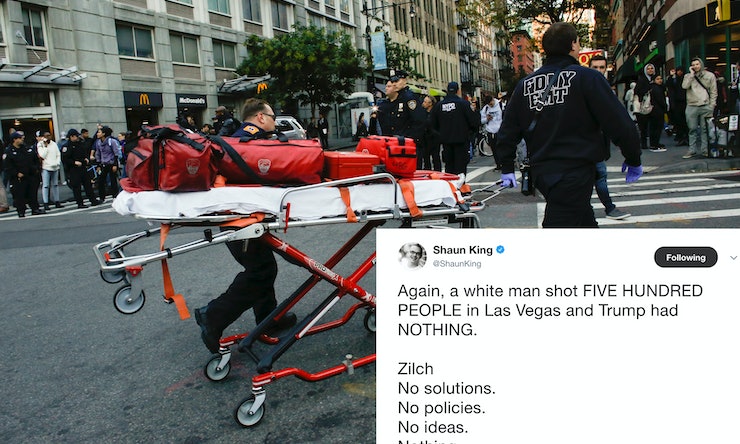 Here in Spain, so tortured by itself and its peoples, sometimes things are done well. After the Madrid train bombings, no laws were changed and no fingers were pointed at the Moroccan community. Nor did any of this happen after the terrorist attacks in Catalonia, as symbolized by the way in which the parents of Xavi, a three-year-old victim of the Barcelona attack, embraced the imam of Rubí. We’re able to differentiate, except when we’re airing our historical disagreements.

The president of the United States, Donald Trump, doesn’t waste any opportunity to show he has a serious rambling-on-Twitter problem. We don’t know if he’s full of outbursts or lacking in principles. He immediately linked the Tuesday, Oct. 31 terrorist attack in New York to immigration in order to tear into the Democrats for the visa lottery program, announced his desire to send the suspected attacker to Guantánamo, and later called for quick justice and the death penalty.

Uzbek citizen Sayfullo Saipov legally entered the country in 2010 because he had won a visa through a lottery system. As Attorney General Jeff Sessions has admitted, Saipov was radicalized in the United States. He didn’t enter as a soldier of the Islamic State because, among other things, the Islamic State group didn’t yet exist. His story would be similar to those of the attackers in London, Paris, Brussels, Boston and Barcelona. The key is to investigate the path to his radicalization — his environment and the imams he was meeting with. His computer and phone could offer clues as to how a man who wanted to try his luck in America turned into a dangerous, hateful person.

Such an investigative process is a nuisance for the political games of Trump and his allies, who are in a hurry to find a distraction from special counsel Robert Mueller’s investigations into the Russia scandal. It’s not looking too good.

The president is back to the idea of barring immigrants from Islamic countries from entering the U.S., an idea which conflicts with established law until the Supreme Court rules on it. On Sean Hannity’s show on Fox News, the bigots’ favorite program, Milwaukee County Sheriff David Clarke said that CNN, NBC, The New York Times, The Washington Post, and Huffington Post were “terrorist sympathizers.” That’s how far it’s gone.

Trump and the bigots who cheer him on didn’t see terrorism in Stephen Paddock’s actions a month ago in Las Vegas, where 58 people were killed and 546 injured. That’s what Max Fisher and Amanda Raub wonder about in The New York Times. There was no trace of the Islamic State group — despite the exaggerated claim of responsibility from the Islamists — or immigrants. Just a crazy white man with free access to weapons who could get into a luxury hotel room with an arsenal of firearms.

All that was heard from the lobby that defends the gun business in the United States, the National Rifle Association, was that it would be in favor of regulating “bump stock” devices that change semi-automatic weapons into automatic weapons. Once the first emotions had passed, not even that was mentioned again. Case closed until the next massacre.

The United States and some of its European allies are involved in several wars in which they’re protecting their strategic interests, not the well-being of the people they say they protect. It’s not just gas or oil, as in the case of Iraq, but the massive sale of weapons as well.

There are complex conflicts, like the one in Syria, in which advances on the terrain are achieved thanks to a group of military forces which, in the larger picture, are our enemies. Such is the case with Iran and Hezbollah, the Lebanese Shia guerrilla group. These are situations that require a good deal of tactful skill, which is exactly what Trump lacks. He acts like a bull in a china shop. This doesn’t justify any terrorist attack, but one of the messages of 9/11 was that in the far West, the strongest countries are also vulnerable. Barack Obama’s strategy of silent cooperation worked better. The only problem is that the results of this strategy are slow to materialize. They don’t give an advantage at election time; they don’t make “prime time” or “trending topics.”

Meanwhile, the refugees who flee from wars are the ones paying the price, as always. The greatest global insecurity doesn’t come from the Islamic State group or al-Qaida, but rather from a world governed by an unpredictable president and in the midst of unbearable injustice. The only good news was that a Twitter employee, on his last day of work, decided to delete Trump’s account. The world was safe from testosterone for 11 minutes, which was how long it took for the account to be put back up.