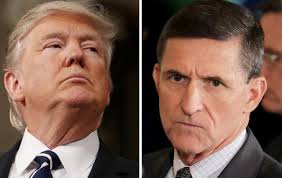 It’s very likely that yesterday will be remembered in U.S. history as the day when the first truly important steps were taken to remove Donald Trump from the White House. Yesterday, we learned that Michael Flynn, President Trump's former national security advisor, entered a plea agreement in connection with charges brought by Robert Mueller, the former FBI director appointed to investigate alleged intervention by Russia in the presidential election last November.

But what does that plea agreement say? It says that Michael Flynn pleaded guilty to lying to the FBI about his contacts with the Russian ambassador in Washington and about whether he discussed the sanctions imposed by the United States against Moscow. Of all the crimes with which Flynn could have been charged, lying to the FBI is the least serious criminal offense, which may suggest that the former presidential adviser has a lot to testify about with regard to relations between Trump and Putin. In fact, the written declaration that Flynn published yesterday is revealing: “I recognize that the actions I acknowledged in court today were wrong, and, through my faith in God, I am working to set things right.” In other words, the man is going to talk, and he’s going to tell everything he knows. Furthermore, by mid-evening, ABC reported that Flynn had revealed to Mueller that the contacts he made with Russian authorities during and after the presidential campaign were made at Trump’s direction.

What we have here is the first fundamental development in the investigation. We now know that the president is one of the targets of Mueller’s investigation, something that the White House still denies. This is only a first step. The entire process will take months and it is probable that, even with other relevant advances in the investigation, the Republican Party will stay loyal to Trump. The midterm elections on Nov. 6, 2018, where all 435 seats of the House of Representatives and 33 of the 100 seats in the Senate will be at stake, will be a potential turning point if it changes the balance in Congress.

If and when Donald Trump is removed from the presidency, America will risk jumping from one nightmare to another. If there’s one thing the president has been devoted to since he taking office, besides golf, it is to stimulate his support base with hate and conspiracy theories. The people who elected him just over one year ago remain loyal and will find it difficult to peacefully accept this sort of defeat in the middle of his term.