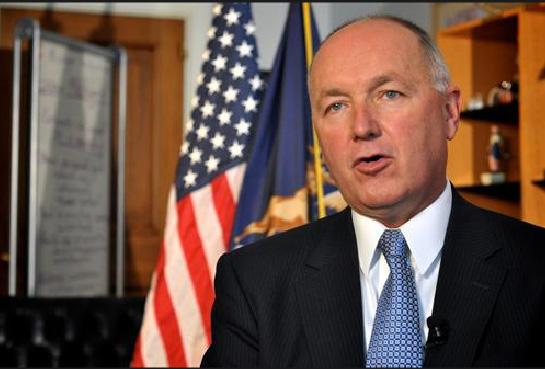 If, as the Dutch saying goes, the first blow is worth a thaler,* then the new American ambassador to the Netherlands, Pete Hoekstra, achieved the opposite and lost a lot of money on Wednesday, his first official day. During a first meeting with the press at his office in The Hague, Hoekstra stubbornly refused to comment on his remarks in 2015 that, in the Netherlands, as a result of a covert jihad, cars and politicians would have been burned.

When a reporter from the TV program “Nieuwsuur” confronted Hoekstra with this last month, President Trump’s envoy denied ever having made these statements. He thought it fit into the category of fake news.

But Hoekstra's apocalyptic statement during a meeting of the David Horowitz Freedom Center was captured in a video that circulates online. In short: real news. A day later, it led to veiled apologies on Twitter from the then still future ambassador. He “regret[ted]” the interview.

The steadily recurring question for Hoekstra on Wednesday at his Hague residence was whether or not he believed politicians had been burned by jihadis in the Netherlands. By systematically refusing to answer the question, he intentionally allowed the clamor surrounding his controversial remarks to continue. It is the type of argumentative response on which President Donald Trump has a patent.

Hoekstra, born 64 years ago in the Netherlands, could have opted to remove the smudge from his 2015 remarks by acknowledging that he was wrong two years ago. By not doing so, he only managed to compound the damage of the infamous remark, and the newly-appointed ambassador has gotten off to a completely unnecessary false start. That is unfortunate for the already centuries-old relationship between the Netherlands and the United States.

Whether it is also damaging remains to be seen. Certainly, friends can take a hit. Both countries have a lot in common, starting with a fundamental value of freedom; and the two countries also cooperate in many areas. Economically, the Netherlands was the third foreign investor in the United States last year.** This is precisely why it is valuable to be honest with each other; “straight,” as they say in the U.S.

Recently, Halbe Zijlstra, the new VVD foreign affairs minister, complained in an interview with NRC that America has “not been so isolationist” since World War II.*** That is a very far-reaching remark for a Dutch minister. It emphasizes the severity of the geopolitical situation. Now more than ever, there is the need for close contacts.

The diplomatic relationship between the Netherlands and the U.S. urgently needed a boost after the many premature changes of ambassador in recent years. Of course, the countries know how to find each other without full diplomatic representation. But the sense of being taken seriously by an ambassador who has a heart for the cause also counts. There seemed to be a role in this for Hoekstra with his Dutch background. One hopes that, despite his difficult first public appearance in the Netherlands, he will be able to find the way toward Dutch society. To all parts of that society, of course.

*Editor’s note: A thaler is an old monetary unit or coin minted as early as 1518 and used in certain central and northern European countries.

***Translator’s note: VVD is a conservative-liberal party in the Netherlands and the largest party in the current government.