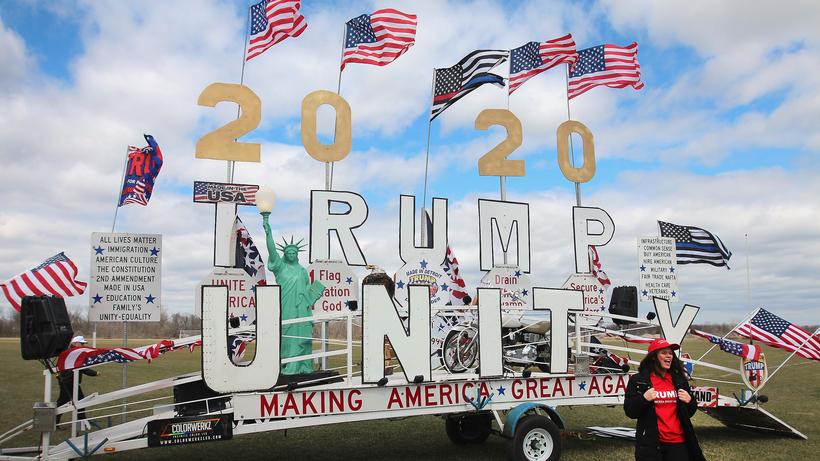 World politics are still being conducted in Washington. Surely, that has nothing to do with the president?

One bullies his way throughout the world and yet has success. With his blackmail politics, Donald Trump is getting everyone to move: In Korea, the presidents of the North and South embrace. In Washington, the most powerful Europeans, Angela Merkel and Emmanuel Macron, visit to forestall trade sanctions and save the Iran nuclear deal. As much stress as Trump has at home, it currently seems to be going superbly for him regarding foreign affairs.

Together with all his recklessness, Trump also has a fine-tuned sense of the weaknesses of others. The only thing that bothers him about the Iran nuclear deal is that it was implemented by his predecessor, the loathsome Barack Obama. The treaty that is supposed to prevent Iran from building nuclear weapons also has an expiration date. Parts of it must be renegotiated in 10 years and Trump is hustling into that gap. It is the same regarding trade with Europe: Trump rails against the large German surpluses, something which others have criticized Merkel for, the International Monetary Fund, for instance.

The farewells to America as a world power are premature; everywhere, the U.S. is still intervening decisively as the strongest military and economic power, precisely because it initiates or serves as guarantor for many multilateral treaties. Because its financial industry is the largest in the world. Because it is the fixed point of a globally networked world. And that is precisely the reason why Trump’s threats have such vigorous effect: in nuclear questions, with international trade and with financial sanctions. So far.

Paradoxically, the danger of a future descent lurks in exactly this strength. Trump is bothered about everything that makes America so strong: globalization; interconnectedness; international treaties that his predecessors negotiated. The nuclear deal with Iran would not have been realized without the U.S. as guarantor. The system of trade is also a U.S. idea. Trump is attacking what has made America strong up to now. He can certainly go berserk for a while yet. The price will come later, when the other nations try to immunize themselves against his extortion.

China, for example, is already very deftly promoting itself as the bulwark of free trade and equitable economic relations. To be sure, that is a shameless lie, but it is effective because Trump’s protectionism is scary. In addition, China is building international institutions without the U.S. For example, Europeans have also already joined the Asian Infrastructure Investment Bank.

However, Europeans must take on the challenge of Trump in their own way. It is clear that if Trump imposes punitive tariffs in the beginning of June, the EU will respond with even more painful tariffs. In addition, the EU must build its own networks with like-minded nations apart from the U.S. The ratification of a free trade treaty with Canada should be accomplished expeditiously. Further treaties with Japan, Singapore and Mexico must follow.

In the Middle East today, the Iran deal regulates the nuclear balance of power. If Trump overturns the treaty in the near future, opponents of Iran like the regional powers of Saudi Arabia, Egypt and Turkey could arm themselves atomically. How that would go without America is already apparent from the example of Syria, where the post-war order is essentially determined by Russia and Iran. Trump, on the other hand, just wants out.*

The U.S. will not be completely isolated as many in Beijing or Russia dream. It is simply too big for that, but the more Trump strong-arms other nations, the faster the country will lose its unique role as arbitrator along with the dominance that Trump’s predecessors have developed over 100 years.

The problem for all of Trump’s opponents is that for now, the short-term success of his policies outshine everything: handshakes in Korea, bombs on chemical weapons arsenals in Syria, the Palestinians keeping still when Trump opens a U.S. embassy in Jerusalem. Trump can boast about that in the coming elections and perhaps even win them again. Perhaps only his successor will have to lead a weakened country from which many nations have turned away.

*Editor’s note: President Donald Trump announced on May 8, 2018 that the U.S. was pulling out of the Iran nuclear deal and initiating new sanctions on Iran.