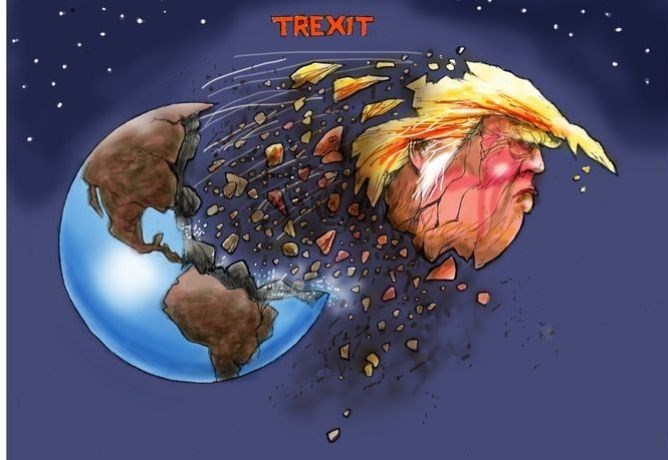 Donald Trump is tearing down the old order without having any idea what a new order looks like. The Group of Seven leading industrial nations summit marks a turning point in which Western democracies are undermining themselves.

The G-7 club (U.S., Japan, Germany, Great Britain, France, Italy and Canada) is obsolete just 43 years after it was founded. Considering their economic power, China, India or Brazil should have become members long ago. The leading rich and developing nations club was started for them; the G-7 might just as well have been dissolved. The G-7’s only reason to exist is the fact that the West could come to a consensus. Yet this purpose, too, is disintegrating.

Ironically, it is the U.S., formerly the guarantor of the liberal world order, which is serving as master demolisher. President Donald Trump no longer feels like playing enforcer for the rest of the planet. He is convinced that America has been cheated during these past decades.

In his “America First” mania, the zero-sum player believes he will be able to get a better deal. Anyone who sees the world this way no longer recognizes any allies, but only opponents instead. The Europeans have tried coaxing and using flattery since the 45th president was sworn into office. In vain. Hopes that the bogeyman would mellow in office were not fulfilled. The closer the Nov. 6 congressional elections get, the more decisively Trump goes about implementing his campaign promises. The damage is considerable: Trump withdrew from the Paris climate accord, withdrew from the Iran nuclear deal and is now inciting a trade war with Europe. Having said that, his good-sense suggestion of a duty-free G-7 zone raises some hope. Why not a trans-Atlantic region without trade barriers?

The West as we knew it no longer exists. That was tangible in the G-7 summit fiasco where tensions were exposed. Beforehand, absurdly mirroring Trump on Twitter, France’s President Emmanuel Macron threatened to isolate the U.S. That was not a good idea, because in a countermove, Trump, out of the blue, advocated readmitting Russia to the Group of Eight, Russia being a country that was suspended after it annexed Crimea.* This, in turn, divided the Europeans. Italy’s prime minister supported the push; the other EU members of the G-7 club opposed it. Who can take this drama seriously? Remove the heated talk and the result of the G-7 summit was zero. A speaker for the Kremlin had a cool reaction to Trump’s invitation to the G-8: Other formats would be more significant.

At the same time, Vladimir Putin accepted a friendship medal from Chinese President Xi Jinping and agreed to double Russia’s trade volume with China by 2020. He then traveled on to a summit with the Shanghai Group (China, Russia, Kazakhstan, Kyrgyzstan, Tajikistan, Uzbekistan, India and Pakistan). While Europe and the U.S. are drawing apart, other countries under autocratic leaders are closing ranks. In this time of upheaval, it would be more important than ever for Western democracies to stick together, but along comes Trump, and without having any idea what a new world order might look like, he tears down the old world order that had been shaped by the West. He is at least as deserving of a Chinese medal as Putin.

*Editor’s note: The Group of Seven had been known as the Group of Eight before Russia was suspended from the group in March 2014.