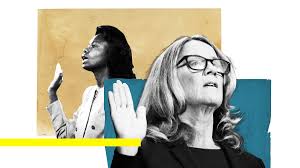 Judge Brett Kavanaugh, nominated by President Donald Trump to the Supreme Court of the United States, has become the epicenter of a great scandal over the accusation of Christine Blasey Ford that he tried to sexually abuse her when they were both teenagers.

It is the repeat of a 27-year-old story in which a black judge, Clarence Thomas, nominated to the high court by then-President George Bush, was accused by professor Anita Hill of sexual harassment. That also provoked a media crisis, although the judge was confirmed by the Senate in the end.

This time, Dr. Ford told a Senate committee that the sexual attack allegedly perpetrated by Kavanaugh in 1982 in a university room "marked" her entire life, an accusation that the judge denied categorically before the same forum.*

Although political and economic interests have great impact, the power plays in Washington and American society itself always try to keep and respect ethical or moral canons, even as they collide with the criminal sphere, as has been the case with respect to Supreme Court nominees Thomas and Kavanaugh.

This brings the case of Attorney General Jeff Sessions to the forefront. Sessions said he would remain in office despite the fact that President Trump criticizes him for recusing himself from the investigation into Russia’s infiltration into the last presidential election. The inquiry is now in the hands of a special counsel.

The independence of the centers of power and the relevance accorded to ethical, moral and legal issues in the United States are good examples of what developing nations, such as the Dominican Republic, should imitate.

Bill Cosby, an American television icon, was labeled a "sexually violent predator” by a judge and sentenced to three to 10 years in prison for sexually assaulting a woman 14 years ago at his mansion in Philadelphia, indicating that justice in that nation is not shortsighted when enforcing laws and rights.

It is undisputed that the United States can be the center of savage capitalism, but it must be recognized that its institutions and legal system are based on ethical and moral values, which its society permanently protects, an example worthy of imitation.

*Editor’s note: Dr. Ford testified that the alleged attack occurred at a private house during her high school years.