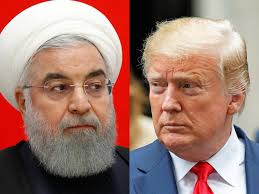 The United States may set limited military objectives, such as Operation Desert Fox in Iraq December 1998. This could be a purely airborne offensive with attacks on individual targets related to Iran's nuclear and missile programs.

As tensions between Iran and the U.S continue to clearly increase, analysts and political scientists are already predicting how real the military conflict will be, how it will develop and even what the consequences will be. However, most of their reflections lean toward the conditional because information is uncertain. Trump talks too much, and the real Iranian leader, Ayatollah Ali Khamenei, is careful not to say anything that is not necessary.

The escalation is considered to have begun when Trump decided to condemn the nuclear deal with Tehran in May 2018, along with his previous speech to voters at a Florida rally in September 2017, when he said, "When they (Iranians) circle our beautiful destroyers, with their little boats and they make gestures at our people that they shouldn’t be allowed to make, they will be shot out of the water."

This has never been used as a casus belli in human history, and it's unlikely that Trump will participate in a "middle finger war" to perpetuate his reputation.

In some circles within the U.S., there is quite a serious discussion about the impending military conflict with Iran. The artificial tension created by the media has divided the nation into hawks and doves, and the former are far fewer in number than the latter, but they are loud and hell-bent about military conflict.

There is a vast list of reasons that the White House may use. For example, not only is Tehran not withdrawing from Syria, but it also seems to be planning to build a naval base between the Russian base in Latakia and Tartus in the container port of Banias, which continues to pose a serious threat to Israel. Other reasons for military intervention include providing help for the Hussites in Yemen and or that Iran is violating the sanctions regime along with unsubstantiated allegations that Iran is secretly continuing its nuclear program.

Experts are already comparing the combat potential of the U.S. and Iran, and the result is clearly not in favor of Tehran. Tehran cannot cope with its main enemy in the face of the aircraft carrier Abraham Lincoln, part of the U.S naval fleet, because it cannot simultaneously send a sufficient number of powerful long-range missiles that the Americans cannot destroy. Moreover, according to Bloomberg, Russia has already refused to sell an anti-aircraft weapon system S-400 to Iran for fear of aggravating the situation in the Middle East.

However, it is possible that Iran will be provoked to close the Strait of Hormuz, through which about half of the world's crude oil exports pass (14 tankers per day), but according to an investment analyst at Global FX, this could double the price of oil to $160 per barrel. Trump can't afford this. Nevertheless, this is a reason for a full-scale war.

On May 14, The New York Times reported that the Pentagon is considering increasing its forces in the Middle East to 120,000 troops. That is clearly insufficient for a ground invasion of Iran, but perhaps they may be enough to deter Iranian armed forces.

According to military experts, in order to carry out a real ground offensive operation and to completely defeat Iran, it would require at least 200,000 to 300,000 troops, and their training and the concentration of forces would take from six months to a year. Pessimists believe that 600,000 troops are necessary for a ground invasion of Iran and 1.6 million troops would be necessary for the occupation and control of the country. However, there are no signs of large-scale preparation for military operations.

It seems that the U.S is more likely to set limited military objectives in Iraq, such as Operation Desert Fox in December 1998. This could be a rather limited airborne offensive or even separate attacks on individual targets related to Iran's nuclear and missile program.

Experts estimate that in the first offensive, the American naval fleet could launch 1,204 cruise missiles onto Iranian territory, but strikes would be carried out by other means (manned and unmanned aircraft or ship guns).

The air raid scheme has already been played out in Yugoslavia, Libya and Iraq. First, air defense systems are hit, then strikes are transferred to combat management posts, military bases, and then military infrastructure including bridges, dams, energy facilities and large fuel depots follow. Finally, the military and political leadership of the country are forced to surrender.

But how long will Iran last?

There is almost no doubt that the U.S can inflict a crushing defeat on Iran - it will win the war, but not the peace. This is what happened in Afghanistan, Libya, even in Iraq. President George W. Bush heavily heavily on the fifth column in the face of corrupt senior commanders who were either Sunnis or Kurds. In Iran, however, the society is ethnically and religiously homogeneous, the mood is completely anti-American and there is no opposition to taking over power.

In this situation, the U.S will seek not only a purely military solution, but also an economic depletion of Iran, primarily by stopping its oil exports or by imposing sanctions on its total exports. On May 28, The Wall Street Journal reported that China has stopped buying Iranian oil after U.S sanctions took effect. India, Turkey, Italy, Taiwan, South Korea and Japan have already refused to buy Iran's oil.

It is unlikely that the U.S sanctions against Iranian oil exports will cause a serious shock to the Tehran regime, but they will financially limit Iran’s military foreign policy actions against its regional enemies.

David Frum, a former assistant to President George W. Bush, is among those who oppose U.S aggression toward Iran and pointed out the risks aggression holds for America. The deposition of Saddam Hussein and Moammar Gadhafi did not improve U.S. security. The Arab Middle East now radiates even greater threats.

"The Trump administration is very probably bluffing in its current menaces to Iran," Frum writes, adding, “President Trump dislikes foreign military interventions. It seems unlikely that he would willingly launch a major war against a near-nuclear state of more than 80 million people."

Trump cannot rely on political, much less significant international military support. The world as a whole did not approve the denunciation of Tehran's nuclear deal. Even the United Kingdom is unlikely to express verbal support. The Gulf war has pushed Iraq into the Shiite orbit around Tehran.

Only Israel, Saudi Arabia and the United Arab Emirates want this conflict. However, the U.S. is not used to acting without resounding applause from an audience. At the same time, Tel Aviv will maintain a predictable neutrality.

On May 14, Khamenei clearly stated that Iran does not want to wage war against the U.S., as it would not be in the interests of either country. However, this will not stop Iran from supporting foreign militias to carry out actions against U.S. forces to disrupt oil transit.

What does Washington really want? It is hardly a war. There is only 1 1/2 years left in Trump’s first term. There is not enough time to prepare and win a clean victory, and all the inevitable hardships will be passed along not only to President Trump, but also to the Republican Party. In addition, let's not forget that Congress will have the last word about the war, and there the president will have to overcome the resistance even among his Republican Party, not to mention the Democrats.

Secretary of State Mike Pompeo has publicly announced that "President Trump does not want any other long-term U.S. involvement in the Middle East or any other region. He openly speaks about the terrible consequences of the Iraq invasion in 2003 and the 2011 intervention in Libya."

It turns out that Trump is not as crazy as his rivals are trying to make him.