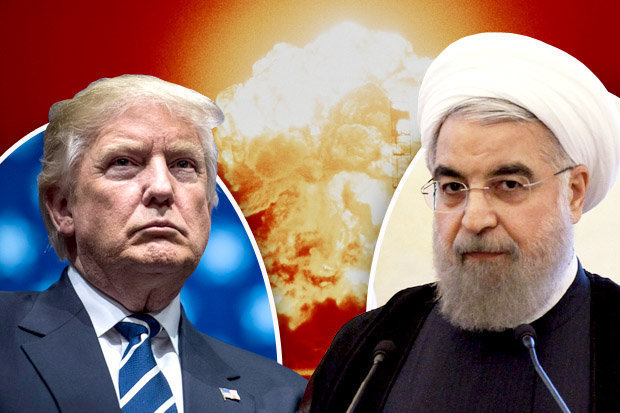 Over the last few days, Iranians have had to queue up to buy ... onions. The price of potatoes has sky-rocketed. Hospitals are facing medicine shortages.

The sanctions that Washington reinstated against Iran after it withdrew from the 2015 nuclear deal last year are hitting the Iranian economy hard.

Iran finds itself isolated in large part due to the uncertainty of the international banking system, with its oil production shrinking from 2.5 million to 300,000 barrels a day. The companies that reinvested in Iran after the partial lifting of the international sanctions after the 2015 agreement have set out for greener pastures.

However, the International Atomic Energy Agency and other experts believe that Iran has strictly adhered to the terms of the 2015 agreement.

The agreement limited its uranium enrichment and stockpiling capacity, and subjected it to a regime of extra-meticulous inspections.

When Donald Trump decided to unilaterally leave the agreement in May 2018, Tehran turned to the other signatories, especially its European partners, France, Germany and the United Kingdom. They wanted to find a way to bypass the U.S. financial blockade to restore their ability to trade internationally. But this approach didn’t work. And now, Iran finds itself a pariah, unable to sell its black gold on international markets.

It’s against this international backdrop that we find the Tehran government ramping up its operations, announcing its intention to exceed two limits it had agreed upon in 2015: the enrichment rate limit of 3.67%, and the 300 kg maximum of low-enriched uranium stocks.

According to an AFP quote from former IAEA inspector Robert Kelley, going from a rate of 3.67 to a rate of 4.5 or 5% "is virtual proof that Iran are not working on a bomb." These are limited transgressions, far from the 90% required for a nuclear weapon.

“It's surprising that Iran waited a year after the U.S. withdrawal before responding,"* said Ali Vaez, an analyst with the International Crisis Group. According to the Iran expert, this relatively measured response comes at a time when Tehran has lost hope in European mitigation measures.

The current escalation is still troubling, especially after more recent aggressive moves, like an American drone being shot down on an observation mission over Iran on June 20. So far, we’ve been dealing with arguments pushing the international community to restore the nuclear agreement and cancel or even circumvent the sanctions that are stifling the Iranian economy, rather than facing the danger of imminent nuclear war. It's clearly a response to Washington's moves, which Tehran is trying to use to establish a balance of power with the White House.

A response that works both ways, at least in theory, according to the Iranian government that says it would back down if Washington agreed to lift its new sanctions.

When the 2015 agreement was signed, Tehran expected its concessions to bring economic benefits. There were some at first, but maybe not as many as Iranians would have hoped for. But foreign investment has picked back up, and tourists have returned.

Normalizing relations with Iran doesn’t look too close on the horizon. Canada has never re-established diplomatic ties with Tehran, and the Canadian embassy in Iran, which was closed under Stephen Harper's Conservative government, has still not reopened — despite the electoral promises of Justin Trudeau's Liberal administration.

But after 2015, the Iranian economy has managed to regain some momentum, reinforcing the moderate faction of the government, represented by President Hassan Rouhani.

Donald Trump, who fought against the agreement negotiated by his predecessor Barack Obama, decided to unceremoniously rip it up in the spring of 2018.

A recent tweet from the White House shows the absurd state of mind that motivated this decision. "There is little doubt that even before the deal’s existence, Iran was violating its terms!", reads the tweet. This slip shows that the Trump administration wanted to do away with the nuclear agreement no matter what the cost, to demand another agreement instead, which Trump would view as more advantageous. Some hawks in Trump’s inner circle also hope that a new agreement would create a great opportunity to overthrow the mullah government.

Maybe the 2015 agreement wasn’t perfect, but it has the great virtue of existing. And being respected.

By rejecting it, Donald Trump has dealt a blow to the agreement. He has also placed the other signatories of the agreement in an impossible position, stuck between Iran and the United States. He has strengthened the Iranian conservative wing. And has pushed Iran into the position of "an isolated country, which feels betrayed, up against a belligerent world power,"* according to Iranian scholar Vahid Yucesoy of the University of Montreal.

In the current climate of extreme tension, slip-ups are possible. What’s reassuring is that neither Donald Trump nor the Iranian government want war. Having said that, the crisis of confidence between Washington and Tehran is absolute. The longer the diplomatic confrontation drags on, the higher the tension builds.

According to the ICG, the only way out of this hornet’s nest would be to appeal to a mediator to try to save the 2015 nuclear agreement by liaising between the two capitals.

The meeting between French President Emmanuel Macron and his Iranian counterpart Hassan Rouhani, scheduled for next week, may be a first step in this direction. We can always keep our fingers crossed.

*Editor’s note: Although accurately translated, the original version of this quote could not be sourced.