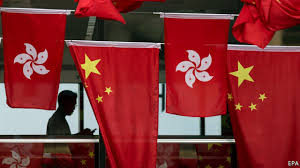 Over the past few days, some members of Congress have shared articles on social media accusing the Hong Kong Special Administrative Region police of using violence to suppress demonstrators, and arguing that the Chinese central government has eroded Hong Kong's democracy and freedom. This old tune has been playing for a while, it is nothing new. Prior to this, the U.S. consulate general of Hong Kong and Macao, and some State Department officials eagerly stepped up as well to express their disappointment, doing so simply to avoid facing political disadvantage by remaining silent. This pattern suggests that officials have something to lose by not stepping forward.

Despite the rhetoric and repeated denial that violence is taking place in Hong Kong, some in the United States are clearly aware of these small reactions. They have cooperated with the opposition in Hong Kong to spread several false alarmist rumors. Some Americans have participated in the violent protests; one even shot at the American flag. Words and activity are becoming increasingly blatant, their purpose being to provoke the people of Hong Kong and force a confrontation with the Hong Kong SAR and the Central Government.

In an attempt to claim the moral high ground in the interference, the U.S. has cheered for the chaos and used public media to carry out a series of staged political events. On one hand, the violent crimes of the opposition and the chaotic elements in Hong Kong are being romanticized as fighting for human rights and freedom. On the other hand, the U.S. is painting Hong Kong police as being systematically unreasonable law enforcers who use violence to maintain a suppressed social order. Viewed through the lens of positive and negative, the U.S. is seizing the dominant position on the subject of Hong Kong. Hong Kong is a region where the police can’t tolerate being splashed with water, a region that takes precautions against terrorism. And yet it is cracking down on assault and crime? Why is there a double standard when it comes to Hong Kong?

When one looks with biased eyes, one sees what one wants to see. Violence such seizing the Legislative Council, the Liaison Office and the police station, assaulting police, bystanders and even news reporters, planting bombs, using flame carts and setting off explosives is intolerable in any society. The continuous outbreak of terrorism and disdain for the rule of law will lead to society’s ruin. Some politicians in the United States know the dangers of this violence, but they are not concerned. They truly believe that the more chaotic and beautiful Hong Kong is, the better. Hong Kong has become the "city of violence" as a result of political disregard for order, and because it is in the best interest of politicians. In the end, using Sima Zhao as the model for extreme violence is nothing more than an attempt to unsettle Hong Kong and turn it into a problem for China, with the end goal of containing or hindering China's development.

Ironically, Hong Kong’s global ranking in the World Justice Project’s Rule of Law Index has jumped from its spot above 60th place in 1996 to 16th place in 2018, which is higher than the current rank of the United States. In contrast, America’s arrogance, prejudice, hypocrisy, cold-bloodedness, selfishness, and the hegemony of its politicians is clear. Its selective blindness, deafness and amnesia have allowed it to ignore Chinese anti-violence efforts, adherence to the law, mainstream public opinion regarding the police force in Hong Kong and the inadequacy of the basic norms of international law and international relations. This sends an entirely false signal to the extremist elements in favor of holding their ground. The United States’ disregard for the facts, and the self-righteous justification of violent intervention is clearly motivated by fear of a world that is not in chaos.

Hong Kong is China's Hong Kong. Hong Kong’s affairs are purely China’s internal affairs and should not be tampered with by any country, organization, or individual in any way. China’s determination to safeguard national sovereignty, security and development interests is unwavering. China maintains an enduring resolve to support Hong Kong’s prosperity and stability, as well as an unshakable attitude of resolutely opposing intervention by outside forces. Anyone who tries to test China’s bottom line will definitely face insurmountable obstacles.

According to media reports, the U.S. military confirmed that China has recently rejected requests from two U.S. warships to visit Hong Kong. China has always considered such requests on a case-by-case basis in accordance with the principle of sovereignty and other relevant circumstances. At this time, and in this place, the need for rejection is clear. Hopefully, this will be viewed as a sobering tactic to ease the minds of frenzied politicians, allowing them to reposition themselves and understand the situation. Hopefully, they will immediately draw a line between themselves and the extremist and violent elements in Hong Kong, and stop interfering with China's internal affairs.

It is a universally recognized fact that the practice of "one country, two systems" is extraordinarily successful. The plot to upset Hong Kong is destined for failure. Once again. Tell Western politicians to mind their own domestic affairs. Hong Kong should not have to worry about those who have ulterior motives!