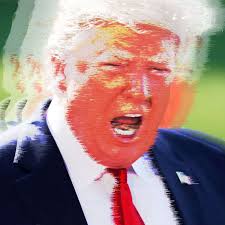 By equating impeachment with lynching, Donald Trump has once again stirred up charges of racism. This accusation is justified on multiple levels.

Donald Trump feels that he is being lynched. The impeachment proceedings are, according to him, the same as murder by lynching. The victim? A 73-year-old white multibillionaire from Queens, who for nearly three years has occupied an office that makes him, according to common parlance, the most powerful man on earth.

When Trump tweets something like this, the American president is once again deploying a racist strategy. Knowingly or unknowingly, he ignites anger only to mobilize it as evidence that he is being victimized. That’s how Trump turns cheap racism into a weapon of self-defense.

Trump Tweets about Lynching, and People Respond with Facts

The President’s whining is cheap in any case. Twitter users have confronted Trump with the facts: 4,743 people were lynched in the U.S. between 1882 and 1968. More than 3,550 of them were black.

Lynching as a form of racially motivated terrorism, especially in the U.S., even gave rise to its own “ism.” Vigilantism is the term used to describe the practice of taking so-called justice into one’s own hands. The leaders of the Ku Klux Klan were masters of this practice when the organization was at its height.

It’s obvious that comparing a political process like the impeachment of a president to barbarous murder for base motives is, in and of itself, an insult to all lynching victims and their loved ones. The fact that these loved ones and victims were overwhelmingly black and the perpetrators correspondingly white makes Trump’s trashy tweet even more wretched and is justifiably eliciting anger among the African American community in the United States.

For Donald Trump, Racism Is a Strategy

Now, some people may defend Trump’s statement by excusing it as a blunder or some rash online spontaneity. This excuse might possibly be acceptable for an 18-year-old on YouTube. But it is definitely not acceptable for the president of the United States, especially not one who has been in office for three years.

And blundering is not the problem here. The problem is racism. Trump plays with racist clichés as a way to either tell his followers what they want to hear or elicit outrage from his opponents, which then in turn animates his base. And that is exactly what happens over and over.

Trump spoke highly of the Nazis after the clash in Charlottesville. Trump flirted with David Duke, former Grand Wizard of the KKK. Trump coordinated a personal attack against Colin Kaepernick after his protest against racially motivated police brutality.

Trump referred to African countries as shit holes and Baltimore as rat and rodent infested.

Trump regularly and intentionally goes head-to-head with black members of Congress; he even suggested that Reps. Ilhan Omar, Ayanna Pressley, Rashida Tlaib and Alexandria Ocasio-Cortez go back to where they supposedly came from. All are American citizens and three of them were born in the United States.

The list easily goes on and on. Trump’s former political aide, Omarosa Manigault, accused Trump in her book of having called black people by a vulgar and racist term. In the 1970s, Trump and his father are said to have refused to rent their residential properties to black people. And so on, and so forth.

Donald Trump’s Comment about a Lynch Mob is Inexcusable

Under these circumstances, it’s almost irrelevant whether Trump himself is a racist, whether his long history of racist expression actually demonstrates something, or whether he is just utilizing the toolbox of white male chauvinism to tell the scum of his country what it wants to hear. Stoking fear, abusing grief and outrage, promoting division – he’ll do anything to help consolidate his power.

Trump also won’t apologize for his lynching remark. The billionaire apparently and genuinely believes that he’s the victim here, that no one has ever been treated this badly, and that it’s thus appropriate to equate impeachment with murder.