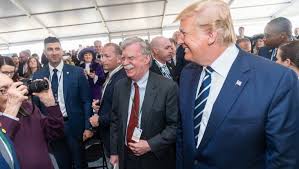 Neither Donald Trump nor the author comes out smelling like a rose in the former adviser's memoir, which shows how American diplomacy has been engulfed by the Trump experience.

Are there still things we don't know about President Donald Trump's ignorance about the rest of the world? Apparently so, as a few gems from the memoir of former National Security Advisor John Bolton have delighted the anti-Trump media, thanks to cleverly orchestrated leaks before the book's publication on Tuesday, June 23.

The Washington establishment was thus delighted to read, in a teaser, that the president of the United States had asked whether the United Kingdom was a nuclear power in front of British Prime Minister Theresa May.

If revenge is a dish best served cold, Bolton likes it lukewarm. Less than eight months after his sensational departure from the White House, the publication of his book “The Room Where It Happened” has allowed him to settle the score with President Trump and his entourage in a savage if not glorious manner.

Neither the author nor the president come out of this account smelling like a rose as the setbacks in American diplomacy are meticulously detailed from April 2018 to September 2019, the period during which Bolton, former U.S. ambassador to the U.N., was a regular observer in the Oval Office.

As we know, the president welcomed his counterparts from the three Baltic states two years ago thinking they had come from the former Yugoslavia because he had confused the Baltic with the Balkans. So, to read in Bolton's own words that he had also believed that Finland was part of Russia evokes a sort of sad déjà vu moment.

It is, however, a different part of Bolton's story that has shocked some American minds on a deeper level: descriptions of conversations with the great autocrats of this world — China’s Xi Jinping and Turkey’s Recep Tayyip Erdogan — in which President Trump offers (or asks for) favors to secure their good graces, or even negotiates for an advantage likely to favor his reelection. This evocation of a first world power being treated like a developing country would embarrass any rational person.

For European readers, the real revelation is elsewhere, somewhere in the reports of the bilateral meetings and international summits between Trump and his allies across the Atlantic. The stories were well known: The systematic hostility toward Angela Merkel, the craftiness with Emmanuel Macron, the anger toward Justin Trudeau, all of this had been reported anonymously by stunned European spokesmen.

The whole book, told by a key inside player who is fueled by the cold and bitter feelings of failure, confirms the diplomatic demolition business that is “Trumpism” and the inexorable separation it has inflicted on the United States. These days, the idea that we could stand together with the U.S. seems outrageous. Bolton's book is, in fact, an account of a year of colossal damage in international politics with a trans-Atlantic divorce being at the top of the list.

Trump could, for example, have sought the cooperation of European allies against China. He preferred to treat them, too, as enemies. “The European Union is just like China, only smaller,” he told the German chancellor, whom he received at the White House on April 27, 2018. Jean-Claude Juncker, then president of the European Commission, is “a vicious man who hated the United States desperately and sets the NATO budget."

If Bolton, a man of the Cold War, considers NATO to be “the most successful politico-military coalition in history,” Trump does not have the same perspective. On the evening before the organization’s summit in Brussels in July 2018, he simply decided that the United States must withdraw from the event and told this to NATO Secretary-General Jens Stoltenberg, who, when questioned about it during a conference broadcast online from Brussels by the German Marshall Fund, did not deny it.

This NATO summit would be particularly turbulent, and the Europeans would come out of it traumatized by the aggressiveness of their American “big brother.” Bolton comes out of it relieved. From his point of view, the worst-case scenario — the American withdrawal — has been avoided. As he left, Trump kissed Chancellor Merkel on the cheek and exclaimed, “I love Angela,” and Bolton believed that his president, who was flying to Helsinki to meet Vladimir Putin, “had a united alliance behind him.” He was gravely mistaken.

That is only one incident, but the accumulation of these moments filled with tension, threats and sanctions which now define United States foreign policy and the weakening of its diplomatic political machinery, have deeply demoralized the American experts. “Trump follows no grand strategy, not even a consistent trajectory,” writes Bolton.

Two events have added to the chaos of foreign policy since the former adviser wrote his book: the COVID-19 pandemic and anti-racism protests.

This former senior Republican diplomat is worried about the deterioration of the United States’ image at a time when the multiplicity and scale of global challenges require real leadership. “For our allies, this is disconcerting,” he said. “I can't think of another time when Americans have so frequently questioned their own democracy.”*

In Foreign Affairs magazine, Robert Gates, secretary of defense under George W. Bush and then Barack Obama, deplores the “overmilitarization of the foreign policy” of the United States. It is time, he argues, to restore the other instruments of American power, in particular instruments of soft power.

*Editor's Note: This quotation, accurately translated, could not be verified.