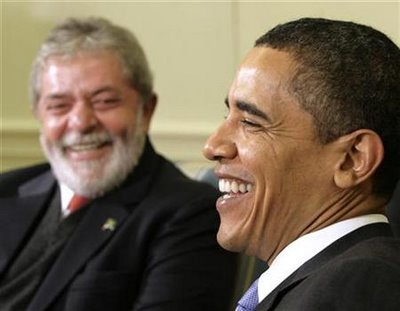 Obama’s compliment toward Lula was an endearing joke, but with a certain envious tone. No one at the time except Michelle would have called Obama “the man.”

The world is constantly turning. I have just invented this phrase; you can quote me. When the two met for the first time, I don’t recall where exactly, Barack Obama pointed to the president at the time, Lula, and said “this is my man.” Lula was in charge of one of the few countries that was booming at the time. The worldwide crisis didn’t seem to have reached Brazil, where economic indicators, camouflaged or not, were positive; there was little unemployment, and the miracle of a socialist-leaning government existing alongside the conservatives without major setbacks. Lula was popular, unlike Barack. The Republican opposition threatened to paralyze [Obama’s] administration, his social reform plans didn’t take off and his hesitant foreign policy didn’t please many. His compliment toward Lula was an endearing joke, but with a certain envious tone. No one at the time except Michelle would have called Obama “the man.”

Fast forward to Dilma’s visit to the United States this week. The world kept turning and everything changed. Today, Obama is undeniably “the man.” His policy of economic recovery, even though he can’t rely on the majority in Congress, is working. The greatest legacy of his administration, a national health plan that removes the United States from the uncomfortable position of being the only rich nation on Earth to not have a universal coverage program, has been approved by the Supreme Court after having been first defeated, called “socialist” and “anti-American” and demonized by the Republicans. The decision in favor of “Obamacare,” the nickname of his health plan, was only one of the [pieces of] surprising good news that Barack received from the American Supreme Court, admittedly conservative. The approval of same-sex marriage throughout the country was also good news. In the United States, Supreme Court judges are being compared to grumpy old men who all of a sudden have decided to take off their robes and show off their colorful shorts.

I don’t know if Barack asked Dilma how “the man” is doing. He may have gone further and asked what happened to that Brazil that Lula used to represent. And they may have talked about the effects of time even with the best intentions. And I wouldn’t be surprised if Dilma complained that Lula’s first mandate had been a dream, from which Brazil has awakened in her government. And that they both agreed that truly, the world is constantly turning.