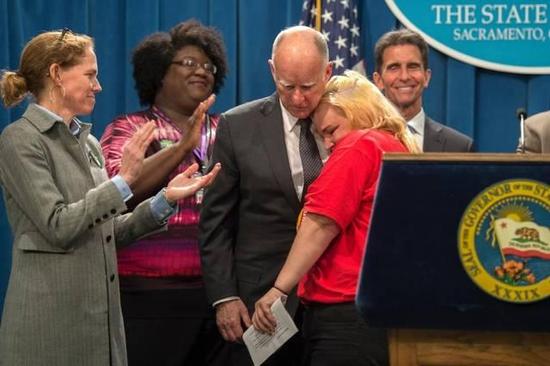 In this photograph, the figure being embraced is the governor of the state of California, Jerry Brown. This week, he solemnly signed his name on formal legislation raising California’s minimum wage to $15 an hour.

The multitude of witnesses present at this event were tearful and embracing each other. Average frontline workers, who acted as their family’s primary breadwinner, made up the vast majority of those present, representing fields such as dishwashers, janitors, cashiers, apple-pickers, among many others all gathered together.

Once this law takes effect, California’s legally defined minimum hourly wage will increase by 50 percent, rising from $10 to $15 per hour, making it the highest in America. As for the federal minimum as defined by the U.S. government, it has held steady at $7.25 per hour since 2009, only amounting to half of California’s new hourly wage floor.

This $15 per hour wage is not just the highest in the country. The passage of this law symbolizes that America’s largest, most economically prosperous, most populous, most liberal, most left leaning state, with the greatest ownership rate of electric cars, the greatest consumer of contraceptives, and with the greatest wealth gap and largest number of Chinese residents will now provide its cheapest workers with the highest minimum wage in the whole world — the equivalent of 100 renminbi per hour.

Currently, California has 5 million workers whose wages are lower than $15 per hour. The passage of this law means that a worker who puts in 8 hours a day for 200 days will be guaranteed a pre-tax income of at least 160,000 renminbi every year ($24,000).

In many respects, America is the best in the world. This is also true when it comes to the kindness with which it treats its workers. If there are still commentators who dare say that America’s imperialist capitalists maliciously oppresses its workers, then 5 million of California’s workers will laugh as they take to the streets, marching arm in arm as they drown you.

Returning to look at China, the vast majority of bureaucrats and the upper class have repeatedly debased our country’s “labor contract law.” These people believe that labor contract law is overly protective of China’s workers, and does absolutely nothing for entrepreneurs. Under these laws, wages rise too far too fast, there are no means of dismissing workers when one wants to, and its usefulness is not flexible enough. For many capitalists, it has already influenced their willingness to invest in China, putting businessmen from Taiwan and Hong Kong on guard.

There has been official research on the opinion that labor contract law has not done a good job of encouraging workers to raise their skills to higher levels as a consequence of labor law that says that if an enterprise increases training to raise the skill levels of its employees, workers may leave their job without providing reason as long as they give a month’s notice. Why would a company want to spend money on raising its workers’ skill level with this being the case?

Currently, the greatest shortage of laborers is among mid- to high-level technicians, something we can link to China’s labor contract law. Should a worker lapse in their duties, a company would find it very difficult to penalize that worker. Take dismissals for instance: When a worker has a position, he has a firm grip on it, which turns into a form of prejudice toward new hires.

There are also some researchers who believe that private business uses workers in a flexible manner. However, standardized working hours make up the foundation of our labor contract law, making things exceptionally difficult for these businesses, and where have the great number of job opportunities gone? Job opportunities for low-skilled workers have dried up. From the perspective of industry, it may be due to the rising cost of business that these jobs have been moved to other countries. And who feels the pain after all is said and done? That would be the workers, whose opportunities to find work have shrunken. The original intent of this law was to protect workers, but it may only end up hurting the interests of some workers, and may lead to an overly rapid rise in wage levels. In the past few years, the growth of wages has surpassed worker productivity, a situation that cannot persist over the long term. The reasons for this are many, but it cannot be said that they bear no relation to the labor contract law.

There is danger lurking. It appears that China’s elite are thinking deeply about their desire for a labor contract law that is both more flexible and more in favor of business owners. If this new law comes to fruition, then the protections offered to average workers will clearly be weakened.

This could mean the following:

Businesses will find it easier to terminate service contracts with their workers;

Unions and labor organizations that ought to represent the interests of workers will lose their position within a business;

When negotiating yearly wage growth agreements, business owners and the managing tier will find themselves occupying a more preferable and leading position;

Many more workers with long-term contracts will gradually find themselves as piece-rate and hourly workers;

In the greater context of a socialist system, each of these consequences would appear to be not worth the effort to refute. Let us first speak of this so-called phenomenon of “workers’ wages rising too rapidly.” In fact, since reform and opening, China’s gross domestic product and fiscal revenue have managed to maintain high-speed growth, but worker compensation as a proportion of GDP has fallen over the years. Following its peak of 56.5 percent in 1983, it continued to fall, and had dropped to 36.7 percent of GDP by 2005, whereas remuneration for capitalists as a proportion of GDP rose 20 percent over the same period of time. While in recent years the growth rates of the economy and worker compensation are closer together, there still exists a clear gap between the two. Thus, it does not matter whether one looks at it from the perspective of economic growth, the protection of workers’ basic livelihood, reducing the wealth gap, or even from the point of view of preserving social stability — the growth of workers’ wages is intrinsically rational.

But no, when it comes to protecting the interests of workers, China’s bureaucrats and scholars not only do not wish to study America’s experience with progress, but they also want to “destroy the great wall,” weakening a labor contract law that has been so helpful to workers.

This truly is enough to leave one confounded.

Must reform, clearance, and casting aside the old unavoidably sacrifice the interests of the most vulnerable? Must it push down the low wages of “frontline” workers? Must guarantees to be able to raise a family be cast aside? Amidst the vigorous discussion these last few months of Beijing’s housing prices, the price of class A stocks, and the exchange rate for the renminbi, we must not forget the difference in the way America’s governors and capitalists treat their workers, and how we treat our workers here.

We already owe trillions of yuan to the tens of millions of retired employees of state owned enterprises as a debt for their pensions. As for the labor contract law, we must not once again make the same great historical mistake.

This is because people, at the very least, have a little heart.