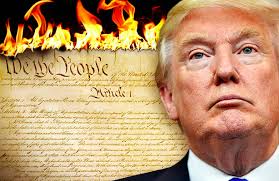 Even if you do not believe it, dear reader, today marks one month since Donald Trump assumed the presidency of the still most powerful nation on earth.

In 31 days, the business magnate who refuses to stop being one has unleashed a real storm upon Washington and the surrounding area. Not a day passes without scandal, confrontation, offense or affront with Trump being the main person involved. Leaders of allied countries, companies and department stores are all targets of his anger. Sacrosanct institutions such as the judiciary are verbally vandalized. Established values and principles of domestic and foreign policy are turned on their head or thrown overboard. In one month we have had enough anecdotes to fill the usual quota from a normal four-year presidency, with leftovers.

All this would just be laughable if it didn’t concern the president of a great power who can unleash a nuclear catastrophe, and provoke economic turbulence and chaos in the markets. Just as serious, or even more so, a man who can incite hatred and division based on race, class and religion. Any thug can verbally assault someone, but if he sits in a chair at the White House, his messages take on more weight and another dimension, and they become incredibly damaging and dangerous.

It is also a matter of concern that instead of settling down, every day brings us a new intensification of the American president’s stupidity. And as the unintentional humor seems to have taken possession of the Oval Office or the Mar-a-Lago Golf Club (owned by Trump), already re-christened by the president as the “Southern White House,” the intolerance and aggression are only going to increase.

Some postcards to document our pessimism (with respect to the much missed Carlos Monsiváis*): In a press conference last Thursday, Trump turned everything upside down. He treated the media particularly brutally; he lectured them, scolded them and tried to give them orders as if he were their boss. And after repeating again and again that they are “dishonest media” or “fake news,” he did the logical thing: he lied. He lied about the margin of his election victory, about the refugees that arrive in the U.S., about the scandal of his recently dismissed national security adviser, about the chaos that’s prevailing in the White House and in his cabinet. On Saturday during a speech, he lied about a supposed attack in Sweden. The lies from the first month accumulate and stack up one on top of another, and Trump’s best response is to call everyone else liars.

But the same Trump overstepped all basic norms – we are not talking about norms of education or respect, but of decency – when in a tweet he called the media “the enemy of the American People,” like that with capitals. The phrase could be from Lenin, or Stalin, or Mussolini, or Goebbels, or from any other fifth dictator, but it’s not. It’s from the president of a country that prides itself on its democracy and freedom of the press. And by accusing the media like that, Trump is now openly seeking to intimidate. Now it’s not the provocation and harassment of an election campaign that are extensively documented. Now it’s the man who swore to comply with and enforce laws, which include protecting the right to free expression, an independent press and access to information.

Many politicians across the world have fought with the media, some due to ignorance and others due to strategy. But no leader of a developed democratic country has taken it to these extremes that could well put at risk the integrity and independence of the media and journalists alike.

The veteran Republican Sen. John McCain summed it up very well: This is how dictators begin. And everything seems to indicate that this is what Trump aspires to. The neighborhood bully turned into the dictator of the most powerful nation on the planet.

Will Americans allow him?

*Editor’s note: Carlos Monsivais was a Mexican writer, critic, political activist and journalist who died in 2010.