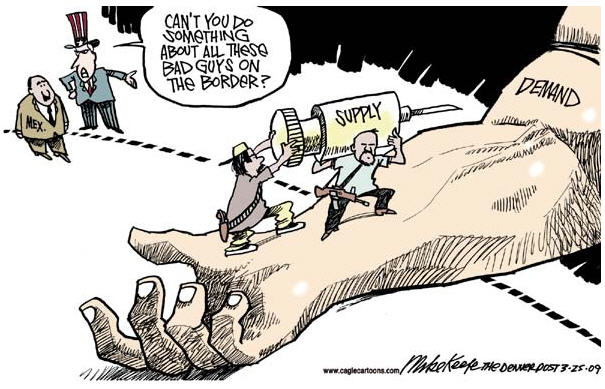 Ever since the famous French political and social scientist Alexis de Tocqueville first coined the term “American exceptionalism,” this term has continually been used to describe and explain the exceptional status and dominance of the United States. From the two World Wars up to the end of the Cold War, Uncle Sam ruled the roost. After becoming a world leader with whom no one could compete, American exceptionalism raised an even more tremendous clamor than ever before.

As for what American exceptionalism actually represents, there are many competing interpretations. But there is no doubt that by now it has become a form of ethnocentrism. Ethnic or racial rather, references the continual control and dominance of white Protestants in America ever since its founding. It is impossible not to acknowledge that other than the legal system and the traditions of the social contract, both of which were inherited from Great Britain, the whites of the New World stressed a culture of social competition. This is an important factor in America’s surpassing and eventual rise to a higher position of power than the Old World of Europe.

President Trump’s loudly proclaimed slogan “Make America great again” obviously stems from the tradition of American exceptionalism. However, the white Americans who are pushing this populist movement are demonstrating that this mindset of American exceptionalism is rapidly declining, and that it is growing increasingly difficult to carry forward.

The most obvious signal of this trend, demonstrated in a recent article in The Economist that cited new research by American social economists Ann Case and Angus Deaton (a Nobel Prize laureate), is that while the mortality rate of non-white races in every developed country including the U.S. is steadily falling, the mortality rate of middle-aged white Americans has continued to climb since the beginning of the century. The death rate of white Americans between 45 and 54 years old is already double that of the same age group in Sweden.

Even more important, the largest factors behind the rising mortality rate among white Americans are alcoholism, suicide and drugs. Drug overdose deaths are especially prominent and have become a crisis among white American populations. On April 4, the conservative New York Times columnist David Brook published a column calling on the Trump administration to initiate specific countermeasures to resolve this ever more critical social crisis. Brooks highlighted that the areas of the country that have been hit the hardest with deaths from opiate overdosing are precisely the areas where Trump voters are concentrated.

More than a few outsiders hold the bias that drugs in America are primarily a problem among racial minorities. This is because most drug traffickers in the U.S. are black, while Latinos are the main force behind the long-distance trafficking of drugs from various places in South America. But this view overlooks the main reason for the spread of drugs—the huge market demand. White people constitute the largest consumer market for drugs in the United States. The U.S. also has the highest proportion of prisoners in the world, and the amount of black people in that population is above average. All of this largely relates to the severe punishment of drug trafficking in the U.S., but it also conceals the fact that the main consumers of drugs are white people. The recent wave of white Americans dying of drug overdoses has magnified these issues immensely.

In the past few years, the number of people dying from drug overdoses has increased rapidly. Other than the emergence of large quantities of synthetic drugs, addiction to pain medications and other kinds of medications are more prominent causes. Among these, opiates are the biggest culprit. Brooks revealed that in 12 states, the number of prescriptions doctors issued for opiates has actually surpassed the total population.

According to statistical data released by the United States Department of Health and Human Services, as recently as 2015, more than 52,404 people in the U.S. died from drug overdoses, which could almost be compared to the total number of American soldiers who were killed in action during the Vietnam War over the course of more than 10 years. Proportionately speaking, out of 100,000 deaths in America, 5.3 whites died of opiate overdose, two and a half times the number of blacks (2.1) and almost three times the number of Latinos (1.5). Thus, neglect of the spread of drugs and the overdosing issue is gradually becoming a crisis for white Americans.

The underlying social reason for the mortality rate, especially the huge increase in the rate of death from drug overdosing, is that the ability of white people to compete socially has fallen. The Economist and the New York Times have both pointed out that this phenomenon is almost entirely concentrated among white people with low levels of education and technical ability. At the same time, it has also led to a considerable increase in people living together without getting married and children born out of wedlock. This clearly reveals the deterioration of the social structure.

The Economist also took care to point out that although European white people are experiencing the same social and economic crises, “hopeless” mortality rates as high as the American one have yet to appear. The only possible way of explaining this, and this is another trait of American Exceptionalism, is that compared to Europe, the U.S. safety and welfare system is much weaker, especially in that it lacks national healthcare.

After Trump took office, in order to protect the interests of middle and lower-class white people, he didn’t dare to openly encourage decreases in the main welfare program. However, under pressure from the Republican-controlled Congress, he also cannot in the least improve welfare relief for lower-class white people. As the Economist pointed out, to improve the steadily deteriorating plight of the middle and lower white classes, only education and training will strengthen their competitiveness. But in the opinion of Republicans, increasing government expenditure on education is exactly the “socialism” for which the Democrats advocate.

Perhaps for a time the protectionist policies that the Trump administration has implemented will decrease the global competition faced by white Americans with low levels of education, but they will absolutely not help them face the even greater pressures of the tech revolution and artificial intelligence. Even worse, Trump’s measures on immigration like the one lowering the limit on the number of H-1B visas will only hurt America’s secret to success for over 200 years of endlessly taking in and then taking advantage of foreigners, thus quickening the decline and fall of American exceptionalism.