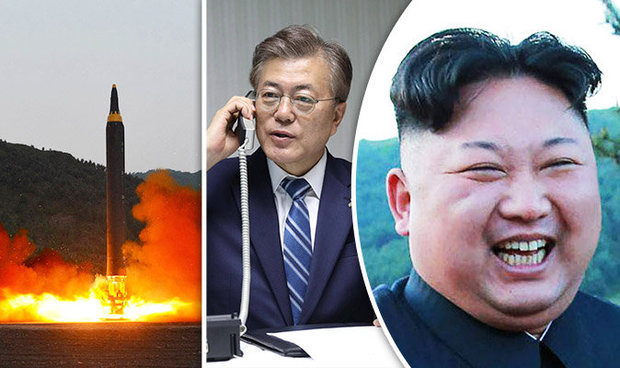 On Aug. 29, North Korea once again tested a ballistic missile. This time, it flew over Japan to the North Pacific. If shot at a normal angle, it would have been the equivalent of an intermediate-range ballistic missile with a radius of over 3,000 km (1,860 miles). It is thought that this was to show that strikes on Guam are not just empty threats, but something that is very doable.

It seemed as though the situation on the Korean Peninsula was moving into a conversational phase, but this missile launch once again heightened tensions. After a telephone call with Japanese Prime Minister Shinzo Abe, President Donald Trump drew the line indicating that now is not a time for conversation. South Korean President Moon Jae-in also ordered a strong demonstration of the power of anti-North Korean sanctions.

North Korea’s behavior is typical. This brinkmanship tactic is aimed at raising the threat levels to the maximum in order to have the upper hand during potential negotiations. However, what do they have to gain from it this time? The moderates who wanted to create dialogue no matter what may have their voices stilled, while hard-liners within the Trump administration may raise stronger arguments. In Japan, public opinion may sway toward remilitarization. China, which acted as North Korea’s breakwater, will become annoyed.

What North Korea wants is to build up its economy and have security for the country and the regime by having economic sanctions lifted. Furthermore, it wants a Korean Peninsula peace treaty and the creation of diplomatic relations with the U.S. However, the situation is headed in the completely opposite direction. The Washington Post commented that, “Kim has now ordered the launch of 18 missiles this year alone, compared with the 16 missiles his father, Kim Jong Il, fired during 17 years in power,” and that they have “paid no attention to its [U.N. Security Council’s] resolutions.”

Now that North Korea has shown once again a will to advance its nuclear and missile technologies rather than negotiating, the Korean Peninsula may once again fall into a strongman versus strongman confrontational structure. North Korea will face further sanctions, and North Korean civilians will suffer more as a result. We urge them again to stop their missile testing and to join the dialogue.

President Moon emphasized that there has to be a great change in South-North relations, despite North Korea’s taunting with missiles. This is in line with Moon’s will to move the situation of the two countries into a conversational phase.

Therefore, it seems that the deployment of U.S. strategic assets to the Korean Peninsula, which South Korea and the U.S. are reviewing, needs to be approached more carefully. Strategic assets are offensive weapons systems that are important for wartime operations, such as the B-1B bomber, B-52 long-range strategic bomber, stealth jets, the Aegis Combat System, and nuclear submarines. U.S. strategic asset deployment is a super hard-line response, which may even create tension on the Korean Peninsula up until the point of war. No matter how much longer North Korea keeps taking disappointing actions, our government must not give up and must keep working with the great principle that there must not be a war on the Korean Peninsula.