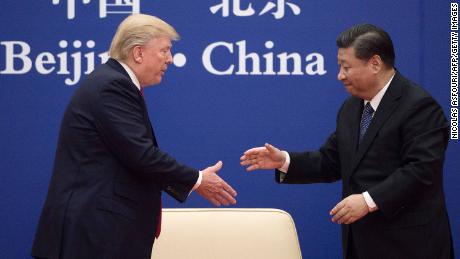 One rises, another falls … During his trek across Asia, which ends tomorrow, Donald Trump, no doubt unconsciously, passed the baton of the world’s leading power to Xi Jinping.

Who is truly the world’s No. 1 power in 2017? The United States gross domestic product, considering what this figure actually indicates, remains ahead of China’s when converted to U.S. dollars: $18 trillion per year compared to around $12 trillion. But the CIA, utilizing other methods (a so-called purchasing power parity), already places China ahead in its annual rankings.

Beyond figures, the tendency toward shifting power is there: not only in the matter of the economy, but also with respect to influence, diplomacy, the political model … even, soon enough, military capability.

The diplomatic sequence of the past week painfully shows who is rising today and who is falling; who has strong momentum, and who is struggling; who knows where they are going, and who is fumbling around.

After stops in Tokyo and Seoul, and after being skillfully flattered by his host in Beijing (knowing the extent to which this would pay off with the infantile Trump) with red carpets and banquets, the American president said how highly he admired this “powerful man,” the “very strong leader,”* “the king of China.”

Here is a Chinese president and secretary-general, Xi, in a powerful position and rising quickly, and who – internationally, at least – knows exactly where he is going. A China that, 10 years ago, was reluctant to openly assume great power, but that today takes the international initiative on the issue of climate change, finances the U.N. more than ever, even asserts itself as the solution for political change: “China,” Xi said in October during a Chinese Communist Party congress in Beijing, “offers a new option for other countries and nations who want to speed up their development while preserving their independence.”

And facing this dictator who is in the process of proposing his model to the world? An erratic United States in obvious decline, whose president is entangled – something which he continuously denies – in the matter of Russian interference. (Trump believes Vladimir Putin, who says, “I didn’t do that,” then Trump turns around and says, “I believe in our intel agencies.”) A man who hasn’t managed to get his bills through Congress, and is only supported by a third of the electorate, in a country that saw itself as the beacon of humanity but where today democracy appears to be broken.

One of Trump’s first gestures, just after he took office in January, was to withdraw from the Trans-Pacific Partnership free trade agreement, which was important to Barack Obama. It was a trade agreement that excluded Beijing, and which was justly seen in Washington as a counterweight to China’s growing influence in Asia.

Today, in the midst of America’s unilateral retreat, Beijing is rubbing its hands in glee: The region is ours! As they face heavy Chinese intimidation in Asia on the issue of territorial waters, for example, many neighboring countries (the Philippines, Malaysia and even Vietnam – but not Japan) are thinking more and more of distancing themselves from Washington and keeping a low profile with Beijing … which is far, very far, from resisting this new regional imperialism.

Strategic tendencies already exist … but today they are radically accentuated by the American president’s fanatic “bilateralism,” retreat and isolationism.

This man is obviously fascinated by despots (enlightened or not), who in return flatter and manipulate him; first and foremost with Xi in China, but also with Putin in Russia, with Rodrigo Duterte in the Philippines …

Let’s not forget (in another region of the world) Saudi Arabia, where the 32-year-old crown prince, already virtually in power, has his rivals locked away, sadistically bombs Yemen, arranges the disappearance of the Lebanese prime minister, threatens Lebanon and Iran with war … and then there’s Trump who, from Tokyo, approves: “I have great confidence in King Salman and the Crown Prince of Saudi Arabia, they know exactly what they are doing.”

Does the man in the White House realize that he, himself, is in the process of liquidating the historic leadership of the United States?

*Editor’s note: The part of Trump’s comment calling Xi a “very strong leader,” accurately translated, could not be verified.