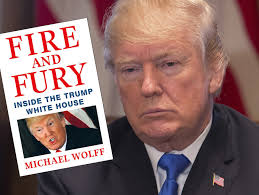 At 3 P.M. on Friday, Michael Wolff’s book “Fire and Fury, inside the Trump White House” was available for download. The most remarkable passages had likely already been leaked, but I downloaded it anyway and started reading. The news is like good food: you don’t want to hear people talk about it, you want to taste it for yourself. Plus, Trump’s Rasputin, Steve Bannon, was featured, someone who does not interest me. I want to know everything about Trump because he gives me the chills.

That we are dealing with a lunatic in the White House is clear. That in itself is a crazy idea, against which you can only arm yourself by allowing a certain form of conditioning. The daily doses of insane news from Washington helps – there are boundaries to one’s ability to be amazed. As such, insanity gradually gains some normalcy.

But Trump manages to wake you from your lethargy. This week, that happened with Trump’s tweet in response to North Korean dictator Kim Jong Un’s message about a nuclear button: “Will someone … please inform him that I too have a Nuclear Button, but it is a much bigger & more powerful one than his, and my Button works!”

Clearly, we are dealing with a lunatic. And not just any lunatic, but a dangerous one.

This week, the online news site Politico disclosed that 12 members of the Congress, including at least one member of Trump’s Republican Party, organized a hearing in early December with Bandy X. Lee, a Yale psychiatrist. The legislators are worried about the danger that the mental instability of the president creates for the nation.

According to Lee, Trump shows signs of insanity and his fitness for office should be quickly be evaluated psychiatrically. He seems to be losing his grip on reality, Lee says. He resorts to conspiracy theories and is close to a “psychotic breakdown,” Lee says.

Lee is the editor of the book, “The Dangerous Case of Donald Trump,” which was released in October and in which 27 psychiatrists evaluate the president’s mental state, including two of the most renowned psychiatrists in the U.S., Robert Jay Lifton and Judith L. Herman. They write in the introduction that Trump is unable to differentiate between reality and fantasy, that he throws a temper tantrum when his fantasy world is refuted, and that he will not respond rationally but impulsively in a crisis.

That is quite worrisome, considering that button.

According to the book, the psychiatrists involved are not acting according to medical-ethical standards – they do not know Trump personally – but they believe their responsibility to warn of the danger called Trump overrides their professional code. Playing in the background is Section 4 of the 25th Amendment of the U.S. Constitution, concerning the removal of a president, for example, based on mental illness.

William Kristol, editor-at-large of the ultraconservative and influential magazine, The Weekly Standard, tweeted this week that Vice President Mike Pence has asked his advisers to prepare a document in which the transfer of power based on the 25th Amendment is arranged “in case it’s suddenly needed.”*

After the button incident with Kim Jong Un, psychiatrist Lee wrote: “Trump will further unravel and he will become uncontrollable because of the pressure of the presidency.”

From Michael Wolff’s book emerges not so much an insane Trump as someone who is completely dense. Almost all sources agree: Trump is appallingly stupid. “There was simply no subject, other than perhaps building construction, that he had substantially mastered,” Wolff writes. Trump is a businessman who is unable to read a balance sheet and, according to some in his entourage, is only semi-literate.

An extremely stupid madman who thinks he is a genius: it is an unfortunate combination.

*Editor’s note: To clarify, Kristol tweeted that he, Kristol, believed Pence has already begun preparations for such a transfer of power scenario under the 25th Amendment, not that Pence had already done so.