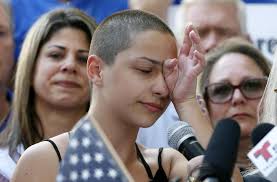 The tragedy at the high school in Parkland, Florida, again revives the debate about gun sales in the United States. The oceans of cash from the backers of lax regulation, especially the National Rifle Association, are crashing up against the fatigue of a society disgusted by the use of semi-automatic weapons to massacre children, adolescents and visitors of public places.

President Donald Trump was the focus of anger when he offered condolences to the families of the victims without mentioning the role that guns played in what happened. The president blamed the massacre on mental health problems, which were undoubtedly present, but could not have caused the tragedy without help from a powerful weapon.

Trump’s carefully crafted statement, far from diverting attention, unleashed a storm of recriminations over the millions of dollars donated to the Republican campaign by the National Rifle Association and its allies. And there was no traction, either, for the tired argument that in the days after a mass murder, it is not proper to discuss policy changes. Feigning concern for the Parkland families, a Republican activist claimed that liberals brought up the issue without leaving time for grieving. A young student from the high school that was attacked sharply disagreed with him, and laid out the emotional grounds for not waiting to start the discussion: “You weren’t there,” she wrote to those who claimed to be concerned about the feelings of family members and survivors.

Nor was a waiting period necessary for the mother of a 14-year-old girl, killed by bullets legally purchased by the murderer, whose age would have prevented him from buying a bottle of liquor. The woman directed her cries of pain at President Trump and at legislators, demanding that they act.

The question posed in favor of gun control is difficult to answer: Why can an 18-year-old buy a semi-automatic rifle, designed for warfare, despite his long history of mental illness and his propensity to violence? Even in the absence of mental problems, the first part of the question would still be valid. It would even be worthwhile to pose the question without any consideration of the age of the purchaser. A civilized society does not need weapons like this on its streets.

Costa Rica has not been the scene of mass killings like those that have occurred in the United States. It is not so easy to sell firearms in our country, but that does not mean that they are not here. They are used to by organized crime to settle their disputes, especially those arising from narcotics trafficking. However, the homicide rate is more than 12 per 100,000 inhabitants and has become an epidemic, according to the World Health Organization. A disproportionate number of those killings are carried out using guns. It is worth taking a moment to think about this issue and the possibility of better controlling who can own and carry guns.

Minister of Public Safety Gustavo Mata has expressed his concern about the problem. The authorities are working to get better information about weapons used by private security companies and to exercise stricter controls on the issuance of carry permits. As the minister rightly says, in our country we do not have the argument on constitutional grounds that figures so prominently in the U.S. debate. Gun control is a good idea in both countries. The reasons are different in each country, but they are easy to see in practice.