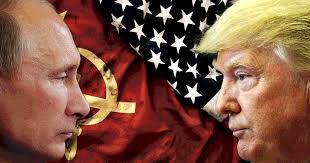 No sooner had the first reports about a meeting planned for the near future between the Russian and U.S. presidents managed to emerge than the sworn enemies of normalizing U.S.-Russian relations became markedly more active. The Times of England reported on London’s concern over the prospect of Vladimir Putin and Donald Trump conducting full-fledged negotiations before the NATO summit and the American leader’s visit to the U.K.

As practical experience has shown, Foggy Albion has mastered a vast arsenal of means for torpedoing U.S.-Russian dialogue and cementing the crumbling European-Atlantic alliance.* That’s why one can expect yet another Skripal case at any time, with quite predictable consequences.**

The retinue, as they say, makes the kings; presidents, too. In essence, Trump is waist deep in the very Washington bureaucratic swamp that he so convincingly promised his voters he would drain. One may, of course, wait until November, when the incumbent president will finally be able to form a Republican “pro-Trump” majority in the midterm congressional elections. After all, currently, an astonishing situation has arisen in American politics: having pulled off the election of its commander in chief and secured a formal majority in both houses of Congress, the “ruling party” continues to impede the full-fledged realization of key points in Trump’s campaign platform, starting with open sabotage by such odious characters as John McCain and Lindsey Graham, and ending with less vociferous, but no less effective, resistance by practically the entire old Republican establishment.

In the first place, this concerns establishing a constructive dialogue with Russia. Add to this the direct disregard of Trump’s instructions to arrange a meeting with Putin after the Asia-Pacific Economic Cooperation summit in Vietnam, a story which was reported by The Washington Post, and you get a fairly vivid picture of the state of affairs in the current U.S. administration.

As for Russia, we are still open to mutually beneficial cooperation that is based on equality. Moreover, in spite of the sanctions regime, we are actively increasing our exports to the U.S.: In just the past year, exports have increased by 17 percent to $17 billion, while Washington has sold goods worth $7 billion to Russia.

It’s not a bad trade balance – in our favor. Yet these figures are nevertheless insignificant in comparison with trade in the European sector (about $250 billion), Chinese sector (almost $100 billion), and in other directions.

Taking into account this microscopic economic relationship, it’s not surprising that the Americans aren’t afraid of jeopardizing the totality of U.S.-Russia relations. On the other hand, even their interaction with China, with more than $600 billion in trade, has undergone significant revision since the arrival of the new U.S. administration.

Herein lies the main problem: Americans are breaking the established and well-understood rules of the game, which causes alarm and nervousness in international relations.

Previously, the U.S. was the engine, the main lobbyist for, and, of course, one of the key beneficiaries of global free trade. Now, due to the strong will of the U.S. president, Washington is on the path of protectionism and is, in fact, launching a trade war on all fronts: against Europe, China, and even against its closest neighbors, Canada and Mexico. Russia, on the other hand, is promoting a pragmatic approach to international relations and becoming one of the most consistent supporters of free trade.

As for the personal factor in the interaction between Russia and the U.S., practically speaking from many years of experience, simply good relations or, as the Americans put it, “chemistry,” isn’t enough to establish constructive dialogue based on equality. We well remember how marvelously Putin and George W. Bush communicated on a personal level. Did it keep our American colleagues from expanding NATO, withdrawing from the Anti-Ballistic Missile Treaty, or unceremoniously supporting “color revolutions” along the perimeter of our borders?

So it is today. The leaders of Russia and the U.S. still compliment, and even speak warmly of, one another. The American establishment continues to make fun of Trump’s inability to force himself to say something that is at least minimally critical of Putin. But so far, there’s been no progress. Relations between the countries remain at the lowest level in Russia’s entire modern history.

And it can’t be said that such a situation is terribly inconvenient for us. After all, even the Americans are already beginning to understand why we don’t at all miss the time when the Russian president was greeted with standing ovations in Congress and CIA career officers were practically working openly in the Russian government. We haven’t yet forgotten what kind of disasters such “friendship” with the United States turned into for our country.

It’s for this very reason that rather than engaging in overly close relations with Washington, today’s Moscow would prefer a precise delimitation of spheres of influence that do not infringe on either Russian or American interests. We’re always ready to take the American point of view into account, even a point of view that conflicts with ours, but we don’t intend to play a destructive “zero-sum game” with the U.S.

Yet in the end, we’re ready for the worst-case scenario, in which essentially there won’t be anything left between our countries beyond the channels of communication necessary to prevent incidents in the military and other spheres.

We have different goals, values and views of the world. However, from our point of view, that doesn’t prevent us from resuming a policy of “peaceful coexistence” instead of destructive, confrontational scenarios.

*Editor’s note: Albion is the oldest known name of the island of Great Britain and is a translation from the Latin meaning white, and was attributed to Great Britain in ancient times due to a constant white fog that covered the British Isles. The full phrase Foggy Albion may have become synonymous with Britain because of the fog pervading over the British Isles until the 1960s.

**Editor’s note: Sergei Skripal is a former Russian military officer and British spy who acted as a double agent for the U.K.’s intelligence services during the 1990s and early 2000. On March 4, 2018, he and his daughter Yulia were poisoned in Salisbury, England, and have since regained consciousness.