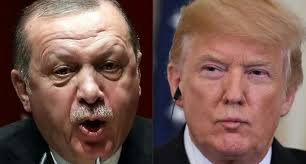 Secretary of Defense James Mattis was opposed, but the bilateral meeting in Buenos Aires between Donald Trump and Turkish President Recep Tayyip Erdogan proved to be the turning point.

Donald Trump’s decision to make a full and rapid withdrawal from Syria was influenced by his bilateral meeting with Turkish President Recep Tayyip Erdogan at the Group of 20 summit of leading rich and developing nations in Buenos Aires on Saturday, Dec. 1. The meeting had been in doubt for several days before Trump, prompted by Secretary of State Mike Pompeo and National Security Advisor John Bolton, went ahead with his one-to-one meeting with the Turkish leader.

The last few months have seen an alarming rise in tension between the two countries, with Syria being one of the most delicate subjects. Erdogan decided to block expansion on the part of the Kurds, whom he essentially views as “terrorists” or, at best, “enemies” of the country. In Buenos Aires, he warned Trump that his army was ready to launch an offensive in the buffer zone between Turkey and Syria. This is the area where American troops operate, officially deployed to combat what is left of Islamic State fighters barricaded in the region.

There was therefore a very real risk of clashes between the American and Turkish military. Trump, who has been advocating a stand-down for several months, preferred to avoid further complications and send U.S. troops home. This has caused dismay among remaining anti-Bashar Assad rebels as well as the Kurds themselves, dependable allies of the Americans in the war against the so-called Islamic State group. Secretary of Defense Mattis was not present at the Buenos Aires summit. The former marine general has always considered a withdrawal from Syria a major geostrategic error.

Mattis is worried about Iran’s activism and, above all, by Russia, a supporter of the regime in Damascus. If it were up to the generals, the American military presence in Syria, and throughout the areas of conflict from Afghanistan to Iraq, would be strengthened. The secretary of defense attempted to convince the president right until the last minute. However, Trump’s tweet on Wednesday, Dec. 19 signaled that Mattis had lost the argument with Pompeo and Bolton.