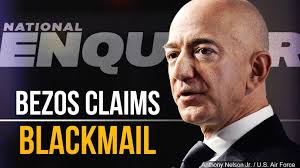 The founder and CEO of Amazon, as well as publisher of The Washington Post, has reported being the object of “blackmail” and an “extortion attempt” by the National Enquirer in the form of embarrassing photos of him and his girlfriend, Lauren Sanchez.

Sex, blackmail and politics. On the one hand, Jeff Bezos, 54 years old, the richest man in the world, founder of Amazon and, among other things, publisher of The Washington Post. On the other, David Pecker, 67 years old, chairman and CEO of American Media Inc., the company that publishes the National Enquirer. In between, the hulking shadow of Donald Trump, recent enemy of Jeff and former associate of David. On Thursday, Feb. 7, Bezos published a post on the online platform Medium entitled “No thank you, Mr. Pecker.”

The first lines seem to recall a scene from “The Godfather”: “Something unusual happened to me yesterday. Actually for me it wasn’t just unusual – it was a first. I was made an offer I couldn’t refuse. Or at least that’s what the top people at the National Enquirer thought.” Bezos includes the letter he received on Feb. 5 from Dylan Howard, American Media’s chief content officer. The note is direct and to the point: We are in possession of 10 photos that depict Bezos in compromising positions, images sent to his new girlfriend Lauren Sánchez (49 years old, news anchor and actress); we are ready to publish them unless Bezos publically states that he has “no knowledge or basis for suggesting that AMI’s coverage was politically motivated or influenced by political forces.”

Here, it is necessary to backtrack a bit. For months, The Washington Post, along with other newspapers, has been delving into ties between Pecker and the Saudi Arabian royals. The media have been following in the wake of investigations also launched by the Justice Department. It would seem that Pecker facilitated contact between the Saudis and Trump, mixing private business and journalism. On Oct. 2, 2018, journalist Jamal Khashoggi was murdered in the consulate in Istanbul. The CIA suspects that the instigator could have been the Saudi prince, Mohammad bin Salman. The National Enquirer launched into a heated defense of the Riyadh royal family. Other publications, particularly The Washington Post, for which Khashoggi was a contributing columnist, accused the tabloid of manipulating facts for political reasons.

Up until a few days ago, this could have remained a confrontation among members of the media. However, Pecker evidently cultivates a particular style of journalism. The message sent to Bezos lists in detail the compromising images as a weapon of blackmail. “We have … a naked selfie in a bathroom … Mr. Bezos is wearing nothing but a white towel – and the top of his pubic region can be seen.” “Ms. Sanchez … smoking a cigar in what appears to be a simulated oral sex scene.” And so on. “Mr. Bezos wearing just a pair of tight black boxer-briefs;” “Ms. Sanchez … revealing her cleavage and a glimpse of her nether region.” Howard, Pecker’s emissary, nastily notes that in all the photos Bezos is still wearing his wedding ring. The entrepreneur only announced his divorce from 48-year-old MacKenzie Tuttle on Jan. 10, after 25 years and four children.

In recent months, Bezos has employed private investigator Gavin de Becker to find out exactly what cards the National Enquirer was holding. A few days ago, he drew his conclusions with a killer response: “Any personal embarrassment AMI could cause me takes a back seat because there’s a much more important matter involved here. If in my position I can’t stand up to this kind of extortion, how many people can?”

Accusations against the White House

Bezos also pointed at the White House. “My ownership of the Washington Post is a complexifier for me. It’s unavoidable that certain powerful people who experience Washington Post news coverage will wrongly conclude I am their enemy.

President Trump is one of those people, obvious by his many tweets. Also, The Post’s essential and unrelenting coverage of the murder of its columnist Jamal Khashoggi is undoubtedly unpopular in certain circles.”

It has still not fully played out. Born in the Bronx, Pecker has known Trump, the ex-contractor from Queens, since 1998. It is a robust alliance, as could be seen in 2016, when just a few months before the election, the editor paid $150,000 in hush money to model Karen McDougal, who had been detailing her sexual relations with the future president. For Bezos, on the other hand, this is a complicated phase on different fronts. In New York, for instance, he needs to face up to growing political opposition to the new Amazon headquarters; he is assessing whether to move it elsewhere.