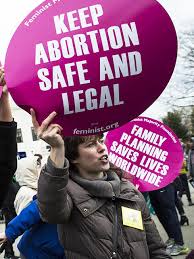 In 28 out of 50 American states, abortion legislation has either toughened or is at risk of doing so. By changing the balance of the Supreme Court, Donald Trump has played his part in this challenge.

It is a well-orchestrated political assault. Alabama, Georgia, Ohio, Kentucky, Tennessee, Missouri … Since the beginning of the year, the list of American states that have decided to toughen abortion legislation has continued to grow. In total, restrictive laws have been passed, or are being considered, in no less than 28 out of 50 states under different guises, but with the same aim – to provoke the triggering of legal proceedings capable of being brought before the Supreme Court to reverse federal case law. The success of this undertaking would turn back the clock in America 46 years.

The latest example to date of this conservative trend came on May 17, when the Missouri General Assembly passed a law that punishes those having abortions after eight weeks of pregnancy (versus 12 weeks in France) with up to 15 years in prison. In Alabama, a doctor who carries out such a procedure on a woman, even a victim of rape or incest, may now be sentenced to 99 years in prison, a punishment greater than the current one for rape itself. In Georgia, Ohio or Tennessee, abortion is illegal after six weeks, a point when most women don’t even know they are pregnant.

This movement shows there is no achievement that cannot potentially be reversed. Women’s right to do with their bodies as they see fit is challenged by a minority but vocal faction of the American population. Since 1973, in the famous Roe v. Wade case, when the Supreme Court found there was a 14th Amendment privacy right to abortion, a powerful movement, based mainly in the conservative “Bible Belt” states, has challenged that ruling.

Nevertheless, despite restrictions, particularly around the time limits within which an abortion can be carried out, the holding that provided the right to an abortion has, up to now, resisted all attempts to overturn it.

The election of Donald Trump, who became opposed to abortion later on, radically changed the landscape. If a large part of the white, evangelical electorate carried him to the White House, despite his far-from-Puritan behavior, it was for a fairly specific reason: to upset the balance at the heart of the Supreme Court in order to put in place a conservative majority capable of changing the precedent on abortion. That mission is making progress. The confirmation of two justices who hold a strong anti-abortion positions, Brett Kavanaugh and Neil Gorsuch, leaves little doubt as to the manner in which the high court might interpret a new case that comes before it.

This attack remains contradictory in nature. Statistics show that, contrary to what the extreme right purports, the current abortion laws in no way provide an irresponsible incentive for abortion. Since 2006, abortions have fallen by 26%. Furthermore, even if the country remains sharply divided between “pro-life” and “pro-choice,” more than two out of three Americans are in favor of Roe v. Wade, and have judged that the decision constitutes a good balance. Before overturning Roe v Wade , the Supreme Court will need to be extremely careful not to risk aggravating divisions in a country already fairly fractured since Trump’s election.