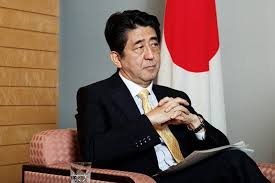 Prime Minister Shinzo Abe must articulate his take on how Japan-U.S. trade talks went during his May summit with U.S. President Donald Trump, so the public can learn, in Abe’s own words, what to expect.

Addressing a recent gathering of business leaders, Abe noted that since trade talks with the United States involve a broad array of goods, the process will not be simple. By this, he may have meant that he will negotiate carefully and thoroughly to iron out differences between Tokyo and Washington.

However, given Trump’s remarks before, during and after the summit, we cannot take Abe’s words at face value.

Trump said at the start of the summit, “Trade-wise, I think we’ll be announcing some things, probably in August, that will be very good for both countries.” And the day before the summit, he tweeted, “Much will wait until after their July elections where I anticipate big numbers!”

His remarks may be paraphrased as, “We quite understand it will be politically difficult for Abe to agree to America’s tariff reduction demand on farm produce before the Upper House election. But once the election is over, we expect Japan to reach a swift decision.”

But what is the exact timing of the deal Abe and Trump have in mind?

But during the post-summit joint news conference, Trump went off-script and said he had “something very important to add,” which was that he had nothing to do with TPP and his administration would not be bound by it.

Economic Revitalization Minister Toshimitsu Motegi, who is in charge of Japan-U.S. trade talks, noted that Trump’s comment was nothing more than a statement of the fact of America’s withdrawal from TPP in 2017.

But we doubt Abe and Trump are really on the same page with regard to farm produce, an issue that Washington is keen to wrap up quickly.

As for Japanese cars, which the Trump administration considers a “security threat” and is considering slapping a higher tariff, we have no way of knowing if Abe has voiced any objection.

It may not be realistic to expect Abe to explain and disclose every detail of his talks with Trump, but the direction of the talks will substantially impact the Japanese economy. Only Abe, who spoke face-to-face with Trump, can allay the public’s anxiety by explaining what Trumps’ ambiguous remarks really meant.

We repeat: The prime minister must fully apprise the public of the speed and direction of Tokyo’s trade talks with Washington by calling Budget Committee meetings in the Diet, among other things. He cannot run away.