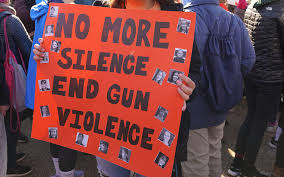 I am not one to make comparisons and every country has its own unique circumstances in combating terrorism and violent crime. But comparison seems useful for illuminating some of the phenomena shared by both terrorism and right-wing violence. The extremists responsible invariably carry some sort of hatred in their hearts that compels them to kill, whether it derives from a warped interpretation of religious doctrine or hypernationalism. These similarities go unnoticed by many observers in this country. They ignore ongoing violence, and there is persistent confusion about how to stop it in the largest and most powerful countries, which nevertheless rush to criticize a smaller country that has faced violent terror for many years.

The reality is that comparison appears necessary when dealing with people who feel inferior to the West, and who blame our own victims here in Egypt.

All of this comes to light in view of what has happened in the United States, where mass killings are so frequent that they’ve gone beyond mere isolated incidents to become a normal fixture of American life. The recent trend seems to show that the phenomenon is becoming one of right-wing racism. In the face of this phenomenon, we find that some residents in America are ignoring what is going on around them and remain dedicated to blaming victims of terrorism back home.

The U.S. has witnessed a pair of bloody mass shootings this past week that claimed 31 lives between them, occurring in Texas and Ohio within hours of each other. These attacks have come at a time when studies estimate that the death toll from indiscriminate violence in the past 50 years has surpassed the combined number of human casualties from every war America has fought in since it was founded.

In El Paso, Texas, police are pressing for murder charges against a 21-year-old suspect who allegedly committed Saturday’s massacre which ended in 22 deaths. The shooter targeted victims of Latino background, including six Mexicans who were shopping in a retail store frequented by the Latino community at the time of the attack. The racially motivated act was described by the Justice Department as a “domestic terror incident,” referring to a manifesto posted online shortly before the attack in which the shooter explained his actions as retaliation for what he described as the “Hispanic invasion” of Texas. Less than 13 hours later, another shooting took place in Ohio. These events call to mind the horrific massacre in New Zealand of this past March, where a white supremacist opened fire on a mosque in the city of Christchurch and killed 51 people.

In the U.S., the strongest and most powerful nation on earth, there remains an inability to reign in its weapons through gun control, and propaganda from the Trump campaign and the anti-immigrant right is blamed for inciting violence. Although more Americans are calling to amend and toughen laws governing the possession and purchase of firearms, President Donald Trump refuses to sign any legislation in this regard for reasons related to his reelection.

It is striking that such a stable and powerful nation as the U.S. cannot handle its rampant gun homicide rate, and it has reached the point where a number of European nations have issued travel warnings to their citizens visiting the U.S. following the increase in mass shootings and racist terror incidents in the country. This is solely a domestic threat, neither imported from foreign nations nor supported by foreign networks, unlike the kind of international terrorism we face in our country.

The terrorism threatening Egypt crosses international borders and benefits from lavish funding from abroad. At the same time, there are foreign channels and media outlets that defend and support this terrorism which is responsible for the greatest number of murdered innocents in our country. These incidents should be drawing constant, in-depth analysis, and getting the attention of those who either support terrorism or blame the issue on ourselves, and of those who are quick to blame the victims or ignore the universal nature and extent of the terrorist threat.

Meanwhile, the same individuals who are fascinated by the countries which are home to many Egyptian expats fail to see how these very nations, for all of their technical and human resources, are unable to deal with their own racist killings and targeted acts of terror.