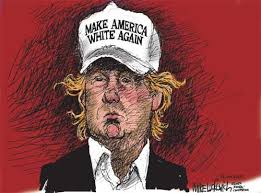 The most recent statistics, published only a few days ago in America, indicate that the number of mass shooting victims in the country this year alone has already reached 150 dead and dozens wounded! And of these killings, 78% were motivated by racism, and carried out by fanatic criminals armed with deadly, legal weapons! The new distinctive feature of racist attacks in the age of Donald Trump is their increasing frequency, to the extent that last week’s two mass shootings in Texas and Ohio were only separated by a few hours. The first shooting resulted in 20 dead and 26 wounded, and the latter left nine dead and dozens wounded. The two attacks differed in the power of the weapons that were used, but their cause and motivation were similar. As expressed by the perpetrators on social media just hours before their execution, the cause of and motivation for the shootings was hatred of immigrants belonging to all races other than the white race, according to overall white supremacist ideology, which sees the white race as essentially superior to all others and thus obligated to rule over them.

Those who reject the current racist reality hold Trump responsible for the crimes, and even openly blame him for being “the instigator,” as evidenced by the fact that the perpetrator of the El Paso massacre, a white nationalist, recorded in his initial confession that Trump’s description of the advance of Mexican immigrants as an “invasion” had excited him and kindled his enthusiasm to seek revenge on those invaders! This appears to have frightened Trump and his Republican Party in light of mounting accusations against him of inciting racism and provoking hatred, discord and strife to the extent that some describe him as having become the president of “The United States of Hate.” These and other accusations could have an effect on his ambitions for reelection to a second term, so he hurried to visit the sites of the two massacres in Texas and Ohio, only to find himself amid crowds who protested his visit and rejected his explanation of the cause of the incidents. Trump spoke only about his reservations regarding laws that restrict the freedom to buy firearms, or certain types of firearms, and so on. It was as though he wanted to reduce the factors that caused these two crimes by focusing on a secondary issue involving weapons, and to avoid discussing the true reasons for the killings.

Indeed, the true causes, as confirmed by the attacks and Trump’s tweets, point to evidence of a strategic plan Trump is leading to restore the white racist movement to the American and European political stage. The movement has witnessed more than 100 years of declining popularity due to the horrific consequences and massacres birthed by racist Nazi ideology during World War II (1939-45). I believe that the members and supporters of the white racist movement who joined Trump in the White House are currently cultivating an inflammatory climate for a return by force despite law established by the international community since the 1950s which rejects racial, religious and sexual discrimination in order to avoid conflict and bring about peace.

That’s why I believe the two attacks of last week in El Paso and Ohio were intended to gauge the popular reaction on the ground, both inside and outside the U.S., to the acceptance of the white nationalist movement, thus paving the way for future actions that may be even more violent in light of lessons they have learned. I would also emphasize that the justification of the white nationalist movement for its actions – its hatred of immigrants and fear of the Islamization of the West, among other claims – appears to be merely a pretext for more distant and dangerous strategic goals, i.e., restoring the age of colonialism that prevailed in the 19th and early 20th centuries!

But the logical question that follows is this: What is the secret behind the escalation of the racist movement’s activities at this moment in time, before the next American presidential elections despite the fact that this aggression may not be in Trump’s interest or that of his party?

All evidence points to the fact that this current timing is not random or coincidental. It comes instead at a time predetermined by Trump taking office, to crown the activity and efforts of the white racist movement over many years, during which it invested in the execution of a long-term plan to restore its position on the international stage. It appears that we are now witnessing a phase of this strategic plan to draw a new political map of the world, with an initial focus on transforming the current reality of the Middle East and enabling Israel to dominate the region. According to this new vision, Israel will be the world technological capital in the fourth industrial revolution, after American technology companies move to Israel as a way to protect their security by meshing their economic interests with other global technology companies. This trend has attracted the interest of the global media and politicians due to the fact that it contradicts Trump’s current slogan, “America First,” which has in effect become “Israel First!” Behind this extraordinary transformation stands Paul Singer, a member of the white racist movement and a Trump supporter.

I will discuss this in detail in an upcoming article which emphasizes that the activities of the white racist movement extend beyond American and European borders to our Middle Eastern region, as it is a priority in their strategy. In the coming months before the end of Trump’s first term we will witness increasing numbers of attacks to Israel’s benefit. This is in accordance with the ambitions of the white racist movement, which is led, far away from the U.S. State Department, by the trio of Jared Kushner, Trump’s son-in-law and assistant, Jason Greenblatt, Trump’s envoy for international negotiations, and David Friedman, Trump’s ambassador to Israel!